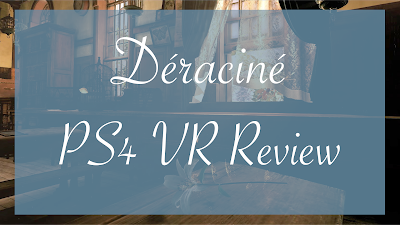 Déraciné, it was one of the many VR games that captured my attention making me want to jump back into the PS VR.  Being able to interact with the characters on screen has always been a dream of mine since the VR technology began to improve.  So the second I saw this game go on sale by chance when looking at new VR game, I just new I needed to check it out.  Déraciné was released November 6th, 2018 by Sony and developed by SIE Japan Studio, FromSoftware. So let's get started!
Déraciné is an upcoming story adventure game from Sony Interactive Entertainment, SIE Japan Studio, FromSoftware and Hidetaka Miyazaki, known for their collaboration on Bloodborne. Taking the role as an unseen faerie in a secluded boarding school, the player moves around in frozen time, collecting various bits of information that serve to unfold an overarching mystery. The story is a new take on classic adventure games and utilizes PS VR’s technology to take gamers on an entirely unique and personal experience.


Graphics/World
The graphic in the game were absolutely gorgeous.  I love the design and how everything looks so realistic.  I honestly was so absorbed in the world around me that didn't even realize that there was a thunder storm going on outside until I was told by Daneilla.  I honestly felt as if I was not just watching the game unfold but I was in the game and that I was apart of the story and each of the characters were reacting to what I was doing.

Storyline
The storyline was so sweet.  All the children wanted the best and just wanted to live quiet and peaceful lives with each other in there home.  The story of each of them trying to save or help one another was so beautiful.  I just loved how in the end the story came in a full circle with it ending with what could be one of the best endings there could be.  However if you want to find out that then you will just have to play the game.

Puzzles
When it came to the puzzles, I found that they could be very tricky.  In the game, whether you pick up an object exchange it with other one will always affect the outcome of the story ahead.  Most of everything was simple and easy to complete however I will admit there were a few times where I got a little stuck with finding this or that.  But overall, the puzzles were super fun to solve and I enjoyed playing solving them.

Thank you everyone for reading!  I enjoyed playing this game so much.  I honestly wanted to play this game from beginning to end without stop as I was just enthralled by the storyline.  I'm really looking forward to playing another game like Déraciné in the future.  So have you played Déraciné?  If so I would love to know.  If you want to get your own copy of the game then you can buy it directly from the Playstation Store, or like me, you can get the game from GameStop (Which might be the cheaper option).