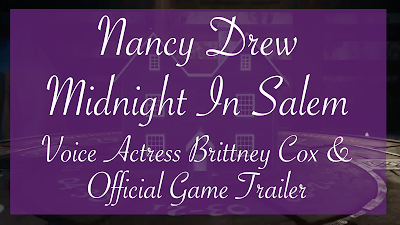 It finally happened!  We finally got to see the official trailer for Midnight In Salem!  On November 30th, Her Interactive released the official trailer for the game and there were 800+ people watching the live reveal of the game.  I was one of those who was watching and chatting in the live chat and it was so much fun talking with everyone.  Today I have a special guest, Daniella from The Little Book Spy and we’re both going to go over what we thought of the trailer.  So let’s get started!


Before we can get into the trailer, I want to first focus on the news of Britney Cox joining the Nancy Drew family as she is the new voice of Nancy Drew!  I personally want to say Welcome to the ND community and Family!  I can’t wait to play MID and all the games you voice in the future as Nancy Drew!  Over on Apple Podcasts or on the Her Interactive YouTube channel they announced the news and an uploaded a podcast of her interview on Unlocked, the official Nancy Drew podcast, which you can listen to it here!  Now, onto Daniella and my thoughts on the trailer!

Jordan’s Thoughts:
While watching the trailer the first thing that caught my attention what the fact that it looks like characters can drive!  First we see Deirdre Shannon drive, then we see Jason Danforth, thought he was mistaken for Joe Hardy by quite a few people in the live chat.  I’m honestly super exited for the fact that driving like this might be a feature we get.  I think it would be super fun.  Though it might just be a quick animation.  I still think it looks really good.

After listening to what was spoken throughout the game, I could hear that this isn’t just a simple mystery that everyone assumed it would be.  No, this story goes deeper than any Nancy Drew game before.  The story was rich with mystery, intriguing, and almost a haunting of some kind.  I believe that this game will be very emotional and everything in it will take you on a journey like never before.

Another thing that I noticed what how present the Hardy Boys were in the game trailer.  They weren’t just in the background like games 13 and 15, no, they seemed to be everywhere in the game!  This is really exciting as this shows how much of an influence they are in MID!  Now, the only thing left is to have Her Interactive develop a Hardy Boys series and life would be complete!

The world looks amazing as we’ve seen in the past, but with this new trailer we get to see more than just still shots.  It really brought the game to life as I watching it play through.  The leaves rustling, the fog reaching out and cloaking the world in mystery and intrigue.  I stink that throughout the game I might just star taking screen captures of the game to make new wallpapers for myself!

Overall, I’m super excited for this game and I can’t wait to play MID on the big screen of my TV once I hook my computer to it!

Daniella’s Thoughts:
One thing that I noticed immediately was how the trailer was very cinematic. The game trailer almost felt like a movie, which was really cool. The music for this game also sounds amazing! I’m definitely looking forward to adding it to my playlist.  I will admit, its going to take me a little bit to get used to the new Nancy’s voice, but I have high hopes that Brittany Cox will do an amazing job!
Obviously, the game has changed a lot since the early development that we had previously known a few years ago.  Based on the story that we currently know today, it does seem extremely familiar. Alibi in Ashes had a very similar story where Nancy was accused of arson at the old town hall.  I’m curious to see if that case is referenced at all throughout the game since Mei is going through a similar situation that Nancy had was also accused. When I referenced the cinematic trailer above, I’m really looking forward to the rich and atmospheric gameplay, an enthralling storyline, and the most intriguing and mind boggling puzzles that I’m determined to solve!

I really liked the world and I’m excited to see more of it!  It looks so beautifully built in Unity! However, I do think the characters are still a work in progress. Even though they’ve had a few years to work with Unity, I still think they’re trying to figure out how to design character in Unity like they were able to design them in their previous program. It’s obvious that the designs for the characters in this game are completely different than the previous games, most likely a new designer in addition to the new program, but I know that over time there will be an improvement.

I’m still very excited to play this game and I can’t wait to get my hands on it!  It’s been so long since I’ve played a new Nancy Drew game!  I remember when the game was announced back in 2015 and I was honestly stoked and found the idea of the game taking place in Salem, Massachusetts ironic at the time.  It was ironic for me because I had finished writing my high school paper on the Salem Witch Trials and I really want to see how much of the information that I used in that paper is relevant in the game (or whether I missed something when I wrote that paper that I previously didn’t know).  Anyways, I can’t wait to play this game with Jordan!

Jordan:
After reading through some of the comments under the trailers release, I just wanted to address them really quickly.  One of the first comments I saw was a comparison to Sims.   Now, do they look like Sims?  Yes, they look like Sims from The Sims 4 but I honestly don’t think they look that bad at all.  In my opinion, I think that their design makes them look more life like and full of energy.  They also aren’t that different in design from the program they were originally using to build the games either.  Though there are visible differences.

The second comment I saw was about how the lip syncing was an issue for many. Honestly there can only be two things that I can think of that would cause this.  YouTube de-syncing the audio or they took lines from other parts of the game.  I can’t say which is true but it is possible that this is the cause for lines not matching up to the person speaking.

Third, I don’t know why some people say the graphics look horrible.  Either I’m biased or they were expecting something that was going to be different.  Honestly,  the only thing that I see that they are using Unity to do the same designs they have always done.  I’m not say that anyone is right or wrong as their opinion is their own but everything that I’ve seen so far is amazing and it is still the Nancy Drew game that I have always loved and will always support.

Thank you everyone for reading!  Only one more day until Midnight In Salem is released and I can’t wait to finally install the game on my computer!  So what did you think of the trailer?  I would love to know your thoughts down in the comments below!