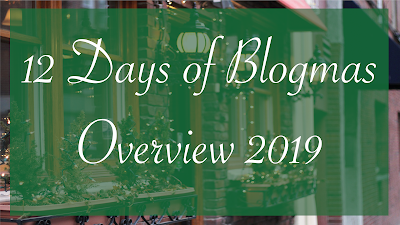 My goal for Blogmas this year was to write 12 Christmas or Winter themed posts as we led up to Christmas.  I thought it would be simple this year since I was writing half the amount of post and I was full of excitement to write everything!

Then finals week hit, it was not only finals week but the game that I’ve been waiting 5 years for was released that first week of December as well.  You could say that I not only got side tracked, but I hit a wall of not wanting to do anything but focus on playing Nancy Drew Midnight In Salem.  Which, I will admit, I really enjoyed taking the time off to play not only MID and write about that but get the chance to play all the other games that have been sitting in my backlog.  I honestly completely forgot that I didn’t have any Blogmas post written past 15th.

To be honest, I had only about 5 wintery/Christmasy themed post written and completed.  When it comes to the other 7 days, I just ended up giving up on continuing to write the Christmasy themed post and replace them with more of my normal post of reviews and other themed posts, well except for Day 11 and 12 as they both still focus on Christmas and Blogmas.  So that would make it about 8 post that were for Blogmas and other 4 were more of my interest with Midnight In Salem and other random game related posts.

To be honest, I feel like I fail Blogmas this year but I honestly don’t care about that too much.  I was having too much fun making content for MID and other games which is where my attention was mostly focused on.

Maybe I'll try and attempt Blogmas next year and actually finish all 12 posts in advance so that I don’t have this issue of getting side tracked, but this year, I think taking is easy and letting things take their course is for the best.  I don’t feel as drained as I did in 2018 since I only wrote when I felt like it instead of forcing myself to write in things I wasn’t interested in.  Ever since I switched my blogs main focus to video games I’ve been more motivated in my blogging and I’ve been able to keep myself from getting burn out.

Thank you everyone for reading!  Even though I didn’t have Blogmas go as expected this year I’m still happy with what I was able to accomplish this year.  So did you participate in Blogmas this year and if you did, how did I go for you?  I would love to know down in the comments below.