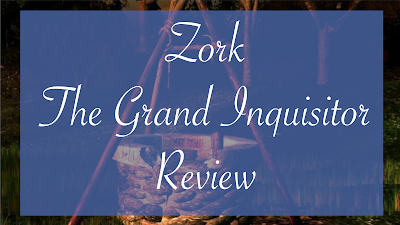 Zork, one of the oldest games I think I have ever played.  However, the original Zork was not the first Zork game that I have ever played.  My first Zork game was Zork The Grand Inquisitor.   My Mom had the original CD copy of the game and I can still remember playing this game for the first time.  It was during the time when I finished playing The Creature of Kapu Cave.  For today's post, I’m going to be writing my review on Zork The Grand Inquisitor!  So let's get started.


Much of the game takes place within the Great Underground Empire between various locations, including the magic university of G.U.E. Tech, Hades, the Steppinthrax Monastery, a viewing point above Flood Control Dam #3, and Dalboz's house. In addition, the player visits Port Foozle at the beginning and during an excursion into its past, along with time travel trips to the famous White House of Zork, and the Great Sea, before finishing upon the Flathead Mesa. A fast travel system is provided in the form of a series of teleportation stations within the Underground, that can transport the player between them by inserting a map into the device. In addition, the player can also use the Underground's Subway System to travel between four stations for major locations.

The game takes place during a time when magic fell and disappeared in Zork from around 100 years before the game start. During this time, the Inquisition rose to power through the advancement of technology. Inquisition megaphones were installed to continuously spout propaganda. Any violation of the rules of the Inquisition resulted in a swift and effective punishment known as "totemization" - a process in which a person (or animal) is put through a machine called a Totemizer, which confines their spirit into a small metal can called a "totem," and then seals it for eternity. The punishment was designed by the Frobozz Magic Company as a more effective alternative to the death penalty, until the Totemizer fell into disuse and was locked in a deserted warehouse in Fenshire; the Inquisition found it following the fall of magic and had the Frobozz Electric Company (formerly the Frobozz Magic Company) restore it for their uses.

This is the third game created by Infocom which used 3D animation and images.  Now you don’t need to play any of the Zork games in order to understand anything.  Each game is a stand alone game, however the game does make references to the other games in the series, specifically the other 2 3D graphic running games but

First off, this game has to be one of the most funniest adventure game I have ever played.  This game breaks the 4th wall of games by literally making references about the parody of how classic adventure games work and such though the use of wisely timed jokes about how this game isn’t an adventure game, when it in fact is.

The game originally can out in 1997, the graphics for this game during this time were amazing.  Comparing it to games now a day, the graphic are amazing for its time as many games were a bit more choppy and pixelated.  The world images look so smooth and polished.  I honestly wish more games were made based on crazy fun storylines like this game.

When it comes to the game play of it, I'm sad to say that the mouse mechanic make this game almost impossible to play now.  Because of how much faster mouses move in new computers it makes it super hard to play.  Though I don’t have the link for it anymore, someone create a mouse slower for it so you are spinning circles while play the game, which is a life saver.

The acting in this game is probably some of the best acting that I’ve seen in most older video games.  Many of the actors in the game are somewhat well known and I think that their acting experience really helped improve the quality of the game and made it so much fun to play.

Thank you everyone for reading!  Out of all the Zork games this one is my absolute favorite.  So have you played Zork The Grand Inquisitor and what do you think about the game?  I would love to know in the comments below.  Also if you want to get you hands on a copy of this game you can get it on Steam or GOG.