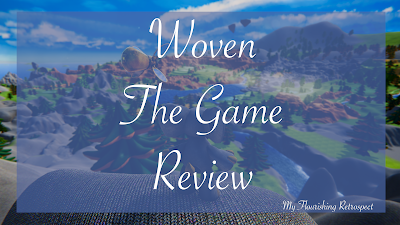 For this weeks review, I’m reviewing the newest release game called Woven!  A cute game about a woollen creature named Stuffy and his Metal Firefly friend Glitch.  The game was released on November 15th, 2019.  I want to thank Dan over at PR Hound for giving me this amazing opportunity by providing me with a Steam Key of the game and helping me answer my questions about the game by sending them over to Matthijs Framer over at Alterego Game.  So let’s get started!

*Disclaimer: I was sent the code for this game in return for a honest review.  All opinions are my own.*

“Welcome to a world where woollen creatures once lived in peace.
Stuffy is a well-meaning but rather clumsy stuffed animal that wanders the world alone.
Glitch is a metal firefly that has lost its memory and identity.

Was Stuffy left behind? Where did all these machines suddenly come from? And what does Glitch have to do with any of this?
Join them on their journey through a world of wool, fabric and hidden dangers.”

I was very fortunate to get the chance to email Matthijs Kramer, a narrative designer and co-founder of Alterego Games about Woven and ask a few questions about the game.  He also allowed me to share the answers here as well.

I was wondering, what was the influence behind creating Woven?

"Well, Vincent da Silva, our Creative Director, started out with the idea of a woollen world that felt good to be in. Just to be in. A hideout away from busy life and a throwback to the secured feeling of childhood. Like a blanket fort, or tree fort, cardbox-fort, any sort of fort actually.
This is why Woven is still the relaxed-feels-nice game it is today. Even though lots has changed. We've added lots of story, gameplay elements and etc, but in its core Woven is still that; a blanket-fort for grown ups.

From when Woven was first announced on Kickstarter up until now, how has the game changed from its original idea?

"We've added more danger to the game (in the later levels). So there are places where Stuffy can go, but to do so would be risking his woollen behind. This really gives an extra element to the game that we felt was missing.
We also planned to do 6 creatures or so. In the end, we've made over 20 different Stuffy shapes.
During the Kickstarter, we had a rough idea of the different levels we wanted to do, but the story was only roughly blocked out. Since then, we've immensely rewritten the story, to the extent that 'the rabbit stuffy' a character from the demo, was cut entirely from the game. Stuffy now wanders the green meadows all alone, without friends of family of any kind. Why is this? You'll have to play to find out."

What do you hope the players takeaway from the game?

"Don't give up in the face of doubt, never. Not ever.
This is as much Stuffy & Glitch's motto as the motto of the story behind creating Woven.

When we started out with the studio, people told us to quit indie game development and 'get a real job'. When the Kickstarter didn't make it, we were discouraged at first. But now we're launching the game on not one, but four platforms, and reactions are really positive. apparently people like to play a relaxing game that's not about killing stuff. So to everyone out there with a dream to create something; don't give up!"


Graphics/World Design
Before I even start my review, I just want to say that I am addicted to this game.  It’s so cute and adorable that I just couldn’t stop playing it.  I fell in love with everything that I’ve seen in the game.  The world, the story, and of course Stuffy and Glitch!  I’ve been playing fun, calm point-and-click adventure games for as long as I can remember and this game reminds me so much of that feeling of when I was younger and playing point and click games with my twin Daniella and my mom.

While this game looks like a great game for kids because of its cute and adorable nature, this game is more than that, Woven is meant for adults too!  This game has so much more to it than its cute little design.  After a long day at work, going to college classes or even working on homework, this game is a great way to relax and enjoy the cute and woolen world.

Puzzles
When it comes to the puzzles in the game, they were super fun to solve.  Even though I got stumped a few times, I was able to figure it out once I got the hang of them.  Some of the puzzles reminded me of games of some other games as you explored the Woolen world, putting two and two together to solve each of the puzzles you encounter on your journey.  As you reach each new level of the game, the puzzles do increase in their difficulty.

While playing the game, I decided to opt for plugging in a PS4 controller into my Mac computer.  I found it made walking around and controlling the game just a little bit easier.  For puzzles, I switched back to my mouse, which made it easier than the controller.  However you chose to play the game, both of these options work extremely well and it all just depends on your preference.


Storyline
The storyline was told through rhyme and I found that it fit perfectly with the game.
In the beginning of the game, you know very little of what is happening and the circumstances surrounding Glitch.  Then as you explore the world, you’ll find one more piece of the puzzle to help you understand the machines in your woolen world and the story behind Glitch.  One thing that I do recommend is to make sure that you thoroughly explore the world, that way you don’t miss any important piece of information of the story.

Overall, this is an amazing game.  Woven is so addicting because of its cute and calming nature, I didn’t want to stop playing.  In a way, I had to literally pull myself away to take a break.  You could spend hours going through the world and looking at each of the little details that Alterego development team put into the game.  I will definitely be playing this game again just to make sure that I find every little piece of story and explore every corner in the world.


Without giving away too many spoilers about the game, I found that throughout the game that there was a hidden message that I picked up on other than, “Don't give up in the face of doubt, never. Not ever.”  I believe that this game also shows how you should always be there for your friend in their time of need.

Throughout the development of story, I watch as both Stuffy and Glitch stood by each other through thick and thin, no matter what, they would always reach their goals together.  I found this to be every touching and I just love how I was able to watch these two characters build their bond of friendship.

Thank you all for reading!  Again, I want to thank Dan over at PR Hound for giving me this opportunity to play the game and Matthijs Framer over at Alterego Games for taking the time to talk with me and answer my questions about the game.  I highly recommend checking out Woven for yourself, it’s so much fun and an amazing adventure.  I’m looking forward to seeing more of your games published in the future!  You can get your copy of Woven over on Steam, Xbox One, PS4, and Nintendo Switch. For now, I think its time I go back into the world of Wool!