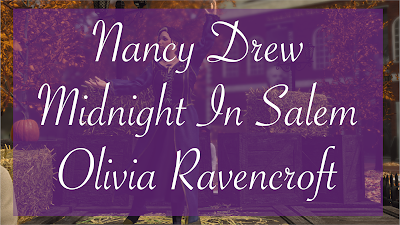 Today it looks like we get a surprise Nancy Drew image release for Midnight In Salem!  For this weeks image we get a sneak peek at Olivia Ravencroft.  This is probably one of the last images that will be released before the games official released.  There are only 6 days left until the game is released and only 3 days left until the official trailer is released!  So let’s get started.

Looking at the image that was released today from a distance it looks really great!  However, it seem that the picture looks like it’s a super early render or maybe the character was in motion?  I’m not honest sure as the pictures looks kind of grainy and pixelated.  Especially Olivia as it looks like she’s dancing?  I’m not sure if because of the movements it’s causing this odd pixelated look around her head, her right arm, and part of her torso.

The only thing that I can think of that causing this is that this was taken while she was moving or because of the blurred background.  The items that’s she’s closer to, the hay bail and crate don’t seem to have this affect on the image but the burring seems to be the main issue. Other than that I think it looks great!

Thank you everyone for reading.  So what do you think of Olivia Ravencroft?  I would love to know down in the comments below.  Only 6 more days until MID is released and 3 days until the official trailer is released!