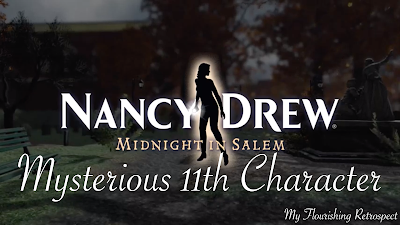 If you were one of the lucky few that attended Seattle’s Geek Girl Con 2019, then you most likely were able to see some official game play of the latest Nancy Drew game, Midnight In Salem! This is exciting news, however they not only showed off the game, but also revealed a mysterious 11th character in the game! This is the first time this character has ever been mentioned and I believe that has everyone, including myself, is shocked. So let’s get to it!

Before we get into this mysterious character I would like to thank the Reddit user Chanpen88 for sharing your friends images and Meliza7 on Twitter for sharing an image of the game as well.  The images for both users can be found on Reddit here and on Twitter here.

First, I want to start off on the fact that we have officially seen MID's main menu screen for the first time!  I think that this updated version looks amazing as we watch the Hathorne house burn in the background. Now, I am curious about what's included in the Extras tab.  My guess is its probably the extra things that they put into the game such as the awards and such.

Moving on to the mysterious new character, her is named Dr. Elisabeth Hirst.  Not much is known about her other than the questions we see Nancy asking her.  It looks like this conversation takes place behind closed doors, which gives me flashback to when we would see Nancy talk to Professor Hotchkiss in Treasure in the Royal Tower behind her hotel room door. This may have been done on purpose to keep what she looked like a secret or we might never see her physical appearance in game other than this brief moment.

We also see the start of some dialogue with Dr. Hirst. The questions Nancy asked her were: “How long have you known my Dad?” and “What can you tell me about the Book of Apologies?” I’m not really sure what to make of these questions since Dr. Hirst is a brand new character and has never been mentioned before, but now I really want to know the answer to these questions!  The second question is about The Book of Apologies,  I couldn’t really find anything about this online except finding The Apologies In Salem, which talks about the courts apology to the women it accused of being witches and how they restored the “rights and good names to the women” as well as a small payed sum to the families.

Is it possible that this is what is being referred to or will it be something completely different?  Whatever it is, we only have to wait 2-3 more weeks before the game is officially released.

In other news about the game, it looks like new point and click feature was also shown off.  Instead of a jump motion, the game now has a gliding feature from one spot to the next. This still give players that point and click feel without too much change. It was also shared that when talking to characters, other character have the ability to walk around in the game and potentially follow you during conversations! This is such a cool feature, in my opinion, and I can’t wait to see it in action. Though this image wasn’t shown, it looks like Lauren Holt also got an upgrade. The previous render that was released a while ago was changed and those errors that we had previously seen that looked a little odd are now fixed!


Even though we didn't get to see Lauren's updated look, we do get to see Mei and Deirdre in the game. Mei was shown sitting in a chair in her home while staring at her cell phone. A very typical thing for a teenager to do. I think this looks great and it shows us a bit more of the Parry house too. I am so excited to get the chance to explore the game more!


For Deirdre, it looks like she’s in the courthouse for some reason. This could be because of her following Nancy during a conversation or for another reason... However, we won't know until we all get to play the game for ourselves.


We also got a look at what looks like something that's in the main square. I read that the metal shield is based on the actual monument in Salem, Massachusetts. So far, I think it looks great and now I'm really curious to see what's actually written on it.


Now, I think this is another one of the most important images that we've all seen to date. It looks like this is how future phone conversations are going to look, I think? I'm honestly not sure, but we can see Frank Hardy's image in the middle left hand corner of the screen and it looks like its a conversation that Frank and Nancy are having as she stands in front of a scarecrow dressed up as a ghost.


Now, it looks like when we're walking around, we can get an extra view of what the cemetery looks like and how Nancy walks around. There we see how the Salem monument of the girls in the cemetery is lit up int he right hand corner.


And now the final image, which is another picture of the museum. Even though I don't see anything really new with this image, it still looks amazing. The only difference is how its night when Nancy is at the museum compared to the previous image when it's daytime. I'm really interested to see how the day/night cycle is going to play out and how the certain time cycles are going to affect what we can do in the game.

Thank you everyone for reading! So what do you think of this mysterious 11th character and the sneak peaks of the game that we have seen so far? I would love to know down in the comments below.

If you want to get your hands on a physical copy of the game, I would highly do so now before all the physical copies are sold for good! There's about less than half of the 10,000 remaining so get yours now before its too late!