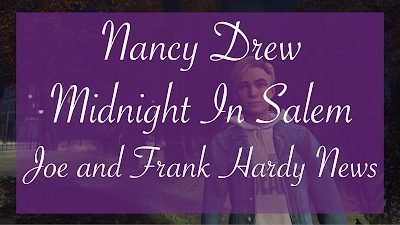 I mentioned in my other post here that Joe looks a little small and a lot younger than what I think they were originally going for.  I think that due to the dark atmosphere and shadowing it makes him look a lot young and almost child like since the whole background seems to be hiding him.

In this second image released, Joe doesn't look as small as he did int he first picture.  Though he still looks pretty young still, I will have to admit his design is starting to grow on me.  Though I still think he looks super young, I can at least tell now that he's doesn't look like a kid anymore.  Hopefully sometime over the next two weeks we will get to see what his brother Frank looks like soon.  Little Jackalope said on Twitch that they are planing to release another character next week.

Joe and Frank Hardy's Voice Actors
Over on Her Interactive Official Unlocked Podcast, they spoke too familiar voices.  Both Rob Jones and Jonah von Spreecken talked with Tammy about reprising their roles as Joe and Frank Hardy!  This is exciting news to me as it brings familiar voices back into the game and I'm happy that these two will be giving us a bit of familiarity in the game.  If you want to listen to the podcast yourself you can find it in Apple Podcast here.

Thank you everyone for reading!  So what do you think of Joe Hardy?  Are you excited that Rob Jones and Jonah von Spreecken are reprising their iconic Hardy Boys roles?  I would love to know down in the comments below.