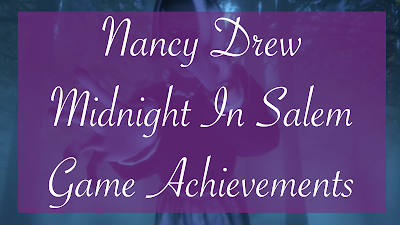 Now I wasn't expecting to find out this little bit of information.  But it looks like we can now look at some of the game awards for Nancy Drew Midnight In Salem over on Steam!  Before we get to this information, I want to thank Huw Miller @Nancy Drew Walkthroughs on Youtube.  Huw was the original person who share this and I am so happy that he did.  I would highly recommend subscribing to him on Youtube as he is a great guy and is as big as a Nancy Drew fan than me, if not more.  So let's get started!

Now before I get any farther into this post.  If you want to hear what he thinks of all this information you can find the video for that here.

So it looks like we have about 24 awards, which compared to earlier game releases, this is way more than any game we have had before.  It looks like a lot of them will be earned throughout the game.  I'm not sure if these awards will be in game awards or just Steam awards as that hasn't been announced.  I honestly would love it if these award were in game not just Steam but I understand if they are just Steam.

From what it looks like we will have the normal awards like in previous games such as Egged and Trivia Tamer.  So yay to Easter Eggs!  I guess if you play in Master Sleuth and fully complete the game you get an award too.  To be completely honest, I don't know what to make of half of these awards.  The ones that really interest me right now are the Happy Halloween, Breakfast, and Ergo Ergot.  I have no idea what we have to do for these and to be honest the last one is confusing.  The first one word Ergo means therefore and the second Ergot basically means fungi or what I’m determining is a mushroom.  So is there something we need to collect mushrooms for maybe for something witch themed... only time will tell.

Looking at the rest of the Steam page here it looks like this is also how they did the Beta testing for the game.  Ahem... If anyone from Her Interactive is reading this.... would it be possible for me to get the beta for this game or any future game?  I'm a dedicated fan that loves Nancy Drew and I would love to help work on the games development and give feed back on it.  Well, I guess it's worth a shot to try, but if not, no hard feeling.

Anyway it looks like they did beta testing on this game earlier this year.  I don't remember anyone online talking about Beta testing the game.  If they did, they probably are under a Non-Disclosure agreement where they are not allowed to talk about what they saw or experience during this early render of the game.

This page also seems to confirm that we will have two different styles of movement as the game says it is controller compatible!  I'm so excited for this!  I'm going to have to play this game twice because I want to not only experience the full normal walking around with a controller, but I also want to play with the classic point and click feature!   So many choices!

Now to the last bit of info we have.  We also get so see what might be the game desktop icon for the game!  It’s this cute little lantern.  To be honest I got Zork: The Grand Inquisitor vibes from it but this is a 1000 times better!  I'm not sure how this ties into the game but I'm excited to find out.

Thank you everyone for reading!  If you haven't yet, check out Huw Miller’s Nancy Drew Walkthroughs YouTube page and subscribe to him.  He does a ton of Nancy Drew related videos and to be honest, I wouldn't know half of the information that I've found recently without him.  So are you excited for Midnight In Salem?  I would love to know down in the comments.

If your looking at trying to earn all the awards in Midnight In Salem, you can check out my post here where I show you how to earn every single awards!