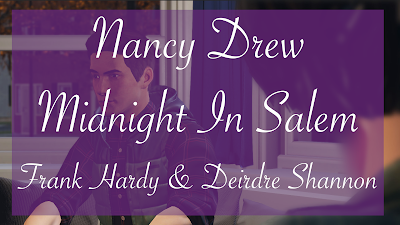 I had somewhat predicted that this weeks character would be released would be Frank Hardy.  After all you can't have one with out the other.  On November 8th, Her Interactive released Frank Hardy with a little bit of a surprise.

To be honest I think Frank looks really good.  A lot better than I expected, he actually looks older and more of an adult when I'm comparing him to his other design over the years.  I can already hear the shipping of Nancy and Frank being together.

I'm finding that his design really show more of a maturity that I didn't really see in Joe, since Joe looked so much younger.  There are still a few things that are need to be couched up like his hair and a few odd patches here and there but overall I like what I see!  I'm highly impress with his design and I can't wait to see him in the game.

Deirdre Shannon?
It also looks like we get to see what I believe is the back of Deirdre Shannon's head.  From what I can see of her she looks really good as well too.  I did notice that here hair looks a. little fuzzy and blurred out slightly.

With the way this picture is being taken, I'm wondering, are we going to get cinematic scenes during the game?  If we don't then thats fine but I think that would make the game really fun.  Just like in Last Train to Bluemoon Canyon intro we get to see more of a movie style dialogue in the beginning   Well if this is taken from something like that then I will be keeping my eye's peeled for this if its true!

Working Together?
Now, I don't really know why both Frank and Deirdre are together.  Did Deirdre ask that she have Frank and Joe help with the case?  Well however they got involved I'm happy that its them instead of Tino Balducci like a previous case.

At first I didn't recognize where they were located until I took a closer look at were their sitting.  The gray pillow behind Frank showcase the Parry's Kitchen and it looks so different than what we saw in the image released in August.

We get to see a bit more of the Kitchen design behind Frank.  We can see the new curtains and a more polished window frames.  Honestly I'm happy with being able to see this little improvement from what was originally seen back in August, as this means that the games final touches are being put into place!

Thank you everyone for reading!  So far with each image that is released we are slowly seeing the improvement with the game as we get closer to the release date!  Only a few more weeks and we can all play this magnificent game!  So, what do you think of Frank?  I would love to know down in the comments below.