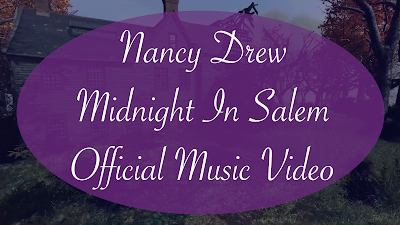 When I didn’t think Her Interactive could surprise me anymore.  I think I should start saying expect the unexpected with them now with all the different releases and teaser they’ve been releasing to us.  On October 11th, they decided to release an official music video for Midnight In Salem’s Main Theme!  I was lucky enough to get to watch it live with everyone in the Youtube chat.  There was quite a few things teased in the video so we have a tone to go over!  So let get started.


So first off, the music is amazing like always.  I felt that it had that slightly lullaby theme in the beginning before switching over to a louder heart racing sound.  It almost felt a little like chase music before slowly switching back over to the lullaby music again.  Over all, this song is fantastic and I can’t wait to hear the rest of the songs for the game.  Hopefully we will get to buy a soundtrack of the game music soon.

Now we can get to the good part of the video.  We got to see a few extra images of what the game is going to look like.  The first one looks to be of the cemetery.  We’ve already seen a bit of the cemetery from the teaser trailer that was released on October 1st.  Though the video is a little laggy and slightly blurry.  We can now see that that what the game looks like when it transitions from day to night and how the game will look with all the creepy and spooky fog.  I think it looks amazing and I’m probably going to want to play this game only on night mode because of how pretty it looks.

The second image we got to see was a foggy forest.  The fog, slowly lifts from the ground into the air.  We can only see just the bare outline of trees, grass, and the flowers surrounding the bottom of of the ground.  It looks so spooky and eerie there.  I really hope that we can get a change to get to explore the forest and it's as creepy as it looks.

Thank you everyone for reading.  I loved the new music that was released today and I cant wait to see what’s going to be released next!  The images in the video are making me so excited for the game as well.  So tell me, what did you think of the “Main Theme” for Nancy Drew Midnight In Salem?  I would love to know in the comments down bellow.