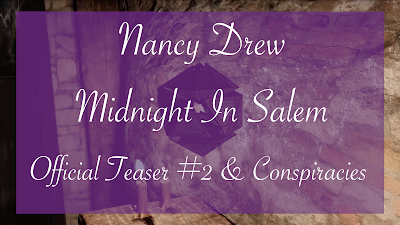 I have no words… I literally have no words to describe what’s going through my mind. At 10 am October 1st, Her Interactive announced that preorders have been pushed back until October 15th.

That was upsetting to hear, especially on the day preorder were supposed to be open and how the game was pushed until December 15th for its official release.  However, things like this are always a possibility.  Thanks to someone on Twitter who’s been counting down the days, it it will be 1659 days between Her Interactive’s last release of Sea of Darkness and Midnight In Salem official release date.  Ironically, you can joke that the amount of time between the games is very close to the year the Salem Witch Trials started.  Salem Witch Trails stared in February 1692 through May 1693.  If you take the year the Salem Witch Trials stared in 1692 and subtract it by 1659 days in between the released of Sea of Darkness and Midnight In Salem, we are left with 33…

Well that’s ironic...  Midnight In Salem is game number #33 and the game is getting released 33 days before the year the the Salem Witch Trails had started…

I seem to be grasping at straws here, but… that just seems like a huge coincidence for me.  Was this done without realizing it or was it done on purpose?  Who knows but this is just one thing that makes you go hmmm….   Well, I hope Her Interactive uses this time wisely to make the game the best we've seen.  Back to what we know, there is a ton of information to go over for Midnight In Salem, so lets get started shall we…

Looking back at the teaser that was released on October 1st, it looks like they shared two of the voice actresses in the game.  My first immediate reaction was that this was Olivia Ravencraft the whole time.  I kid you not, but my second guess was that this was maybe Nancy Drew we were hearing towards the end.

After looking in the comments and digging a bit, we do in fact hear Nancy’s voice as she is saying, “I don’t know how to explain it, but I saw something.”  I had to do a double take for this one since it sounded like the same person when I first listed to it.  But after listening to it again, I can hear the difference and can say that we have Olivia Ravencraft and Nancy’s voice.

Nancy’s voice was also confirmed by Little Jackalope over on the Amateur Sleuth Blog here.  To add even more icing to the cake, we also get to hear our favorite and memorable Jonah von Spreecken as Frank Hardy and Rob Jones as Joe Hardy!

While watching the teaser, if you look at the 00:29 mark at the left you can see who I believe to be Deirdre Shannon standing in Town Square which is opposite of the cemetery.  I also see a second person standing there, who I believe is possibly Olivia Ravencraft.  It makes me wonder why she standing outside instead of being inside her shop, but I guess that question will only be solved when we play the game.

Also at the end of the trailer, the girl pictured above jumps out at you at the 00:44 mark.  She looks just like the girl in the Cemetery statue.  It might be for the fact that she was accused of being a witch and is now haunting Salem.  It's a bit of a stretch, but you can’t deny the fact that she was one of the girls in the statue in the Cemetery.

Now that we got the important facts out of the way.  Did you see how we get to walk around town!  That is like a Nancy Drew dream come true!  I’ve always wanted to play a Nancy Drew game were you get to walk around and you aren’t restricted to a point and click style.  Now we can all experience it!  For those that were afraid of the camera bouncing up and down that we originally saw in the Unity demo when Her transferred Labyrinth of Lies, we saw Nancy had a slight bounce that we could see on the screen. It looks like we won’t have to worry about it.  I also believe that there will be option for those that want to keep to the classic style and use point and click, which is great! I wonder what the difference will be between the two styles.
The game overall looked really smooth and the graphics look amazing!  The color and detail, it's all I wanted to focus on when I first watched the trailer.  The puzzles that were also shown also reminded me of the game Her Interactive help publish called Odyssey-The Story of Science (2017).  The puzzles also remind me of the Myst series and Obduction with the way the puzzle and items can be rotated around.

Over on the Amateur Sleuth Blog, a few things about the game were clarified.  We now know that preorders start at 11:00 am PT on October 15th.   They also made an announcement that it will not take them 4 years to produce another game!  Which means that during these 4 very long years, they have been working on more than just one game and they were possibly creating a back log of games so that they can released them possibly on a yearly bases.  Though the timing of when the new games begin released isn’t stated we can probably assume that we will get possibly another game sometime in 2020.  I really hope that’s true as that would be amazing!

Another thing, it looks like if you buy a physical copy of the game you sadly only get it on one platform.  That was one of the reasons I bought it physical other than its a collectors item to me.  I was able to play it on both Mac and PC but that seems to no longer be happening.  I asked them to clarify but I have not heard a response as of yet.  If I do I will update this post with this information.

Thank you all for reading!  There was so much released on October 1st about the game that made this post a bit longer than normal.  I though I’m sad the game will not be released in November, I’m hoping that Her Interactive will take this time to master the game and make it the best game to date!  So what are you excited for when it comes to Nancy Drew: Midnight In Salem?  I would love to know in the comments below.