Nancy Drew Midnight In Salem Museum and The Emporium 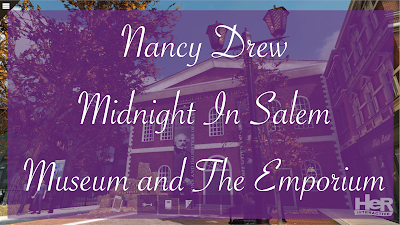 If you didn't think that the information that was released on Tuesday was enough, then it probably surprised you that we got even more on Friday.  On October 4th, Her Interactive released two more images and they show a ton of new pieces of information as well as some new information that a Reddit User posted.

Normally I try to focus on hard core facts when it comes to Nancy Drew games since I can’t say for 100% certainty that rumors are true.  However, I think it's interesting enough for me to share here.  So let's get started shall we!


The first thing that catches my eyes in this photo is the fact that there are random people just standing around… or sitting… anyway it looks like we get random towns people instead of what were all used to.  Which is an empty town that had no one in it.  That super exciting and it makes me wonder, are they intractable or will they just ignore us like we're not even there?  Big questions and I need answers!  The Salem Museum of History looks beautiful!  There is so much to this town that we haven’t even thought about and I just can’t believe the size of the game map that we know of already.

Off in the background behind the museum you can see this amazing cloud shadow which makes the surrounding area behind it look super dark and creepy.  This image reminds me of other companies games that use Unity such as Ubisoft, Cyan Inc., and so many more.  This game not only uses these new features for this game, the game embraces it and how that Nancy Drew games look amazing in Unity, as if it's been using Unity all this time.

I might not have been right two weeks ago or even a week ago, but I am right partially this week!  The second image that was released was of Olivia Ravencroft’s shop Ravencrofts Emporium!  It looks like that the store holds small little trinkets like postcards, books and magazines, t-shirts, maybe some potions.  Basically it looks like your every day gift shop with a bit of a witch craft theme to it.

Though we only get to see the front entrance of the store, we also get a few extra goodies from the game such as the new inventory bar and cell phone.  This inventory looks super clean and nice, as it only takes up a small portion of the screen when in use.  I’m guessing that it will disappear when not in use just like in other game.  This means that we get more room for seeing the game instead of an inventory bar.  I was really curious on how they would change the inventory bar with the switch to Unity and from what I see, I whole heartedly approve.

To also point out it looks like we get to see just a sneak peak inside the museum such as a history board of the Salem Witch Trials.  It kind of looks like a list of the people accused since it shows a list of their names, year of birth, and death possibly.  I can’t say for sure what the board says since I can’t read it very well.  That and I don’t see the whole thing.

Midnight In Salem Images Metadata
Over on Reddit, a user named sergehanna2012 went and looked at the data for all these new screen shots that Her has released over the last few months, and their finding were very interesting.  It looks like some of the images for Midnight In Salem were taken over the last 5 years, reach ranging from early 2016 up until 2019.  So what does this mean?  Does this mean that they finished MID and are working on other games and are polishing it based on what we as players are saying, or are they working on multiple games at a time?  It's very possible that they did finish Midnight In Salem and are trying to get a reaction to the unfinished work to see how we all respond.  They also stated in the Amateur Sleuth’s blog that games won’t take as long to be made in the future.

If they have been multitasking on different games and are preparing them for up coming releases after Midnight In Salem then that’s probably why we have had so many push backs for the gam.  If game #34 is not finished or is having issues then they probably are pushing MID so that they can stick to their new schedule.  I can’t say that this is true since I don’t work for Her Interactive and they keep a very tight lip about this kind of information, but this might explain not only the long wait but the extra bumps that the release date had.  If you want read the original Reddit post then you can find it here.

Thank you everyone for reading!  There has been so much posted for Midnight In Salem and it makes excited as ever when it gets released.  The image data for the last 13 images released are super interesting and change up the game completely on what I think Her Interactive are planing.  What do you think of the images and the Metadata that was found on early images?  I would love to know down in the comments.