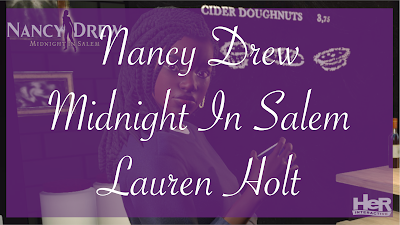 I’m so excited.  On October 25th, Her Interactive released another image this week and this week instead of a location they decided to tease us with a character image!  We are only 38 days away from Midnight In Salems Official released date on December 3rd 2019.  We also got a little bit more information about how Midnight In Salem came to be, or should I say based upon.  Now, enough chit chat, let get to this new information!
I’m going to say this in the nicest way possible….but Lauren looks like a Sims 4 sim that has to much broken CC content that causes her hair to look slightly distorted, the odd white lighting shadow by her eyes, and what looks like she’s wearing purple eye contacts?  This photo looks like it was taken in the very early pre-stages of development when they first starred to design her in Unity.  Hopefully these little glitches or problems are fixed before final game.  I bet once we see her final render she will be beautiful!  But for now, there’s room for improvement on these bugs.

When it comes to where she’s located, it looks like she behind the counter at her apothecary and tea shop.  Just the little bit we can see is really making me curious on what the rest of the store looks like.  So other than a few glitches here and there everything looks like its coming together and I can’t wait for the final product.

Midnight In Salem Based On
Now over on the Her Interactive Youtube Channel, Jai shared that Midnight In Salem is based a little bit on the Nancy Drew book, The Witch Tree Symbol.  Now, I haven’t read the book yet but I’m really curious about how much of the book is mixed into the game.  I’ve read other books in the series where the games were based on and there were quite a few elements taken from the story and put into the book.

Thank you everyone for read!  The days are getting closer to finally getting the game finally getting released.  There are still plenty of physical copies PC copies of the game left if you want to get your hand on a physical edition of the game here.  Sadly, if you get the physical edition you will not receive it until after December 3rd and its PC only.  However, if you want to get a digital PC only or Mac only edition you will get it on December 3rd.  If you want to get both PC and Mac digital editions of the game then you can wait until the game is available on Steam.  So what do you think of Lauren Holt and have you read The Witch Symbol?  I would love to know down in the comment down below.