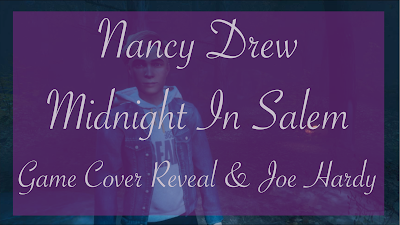 I can't believe it!  We finally have the game cover for Midnight In Salem!  Ahhh!  Ok back to being professional... Over on Her Interactive's Twitch page for their Halloween Stream, they released the cover art for Midnight In Salem in addition to another character 3D image as well!  They did this during the intermission as well as at the end of the stream.  I'm so excited to sharing this. Let's get started!


The first image that was released was Joe Hardy!  I was super excited to see Joe Hardy in the game and this week we got to see him!  When I first saw Joe, to be honest, I though that he looked a little small.  Like he looked like a 14 year old kid, when he's supposed to be a whole lot older.  I'm not sure if it because of the angle the photo was taken or what, but it makes him look so much smaller than what I think he would be.  I know that he is only 17 years old, but based on previous games, he was a little bit taller and had broader shoulders in those games.  I guess I will have to wait and see his full profile a little bit later.

And now for the grand finally...

The Midnight In Salem Game Cover!

Over on Twitter, I predicted that the game cover would show an "open gate in the front, with the burning Hathorne house in the background."  Well, as it turns out, I was partially correct!  We do see the burning Hathorne house in the background but we also get to see a bit of the spooky cemetery as well as what looks like a ghost in the new Nancy Drew silhouette.  I think the game cover looks amazing and I think it really show cases the next chapter in the Nancy Drew game series.  Thought the game rating is not in this image, LJ did tell share while they where steaming that the game is E10+.

Thank you all for reading!  Overall, I think these images look amazing.  So what do you think of Joe Hardy and the official game cover for MID?  I would love to know in the comment down bellow.