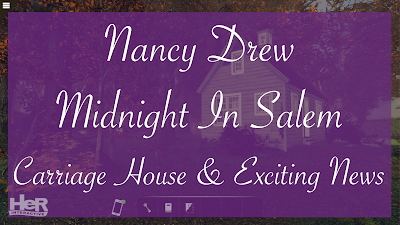 It official! Nancy Drew Midnight In Salem is now on Pre-Order and we are now on track for the game being released on December 3rd.  I’m super excited for this and I’ve already purchased my physical copy of the game, however it will take a bit of time for me to review the game since it will take a week to get my official physical copy.  However hopefully when the game goes on Steam I will be able to play it then.

Well for today’s post we’re not going to just focus on the fact that we can pre-order.  No, today’s post is focusing on the latest image that was released.  On October 18th, Her released the Carriage House.  Also if you get the newsletter from Her Interactive we also got some extra goodies!  So let get started!
Now I don’t know where this little beauty if hiding on the big map of ours, but if I had to guess this is probably somewhere close to the Hathorne House.  As Carriage houses usually were places were people kept there carriages and such its probably the only logical conclusion you can think of.  Personally I think that this little house is absolutely adorable and I want to fix it up and make it look brand new.  It already looks like its had a make over with the new window that were place in so it looks like someone was taking care of it.

Now if you get the newsletter like I do, they announce that on Thursday October 31st, they will be streaming Message in the Haunted Mansion!  That alone will be super fun!  Which Daniella and I might pop in under DJTwinGamers in that chat so if you want to chat about the game with all us Nancy Drew fans you're more than welcome to join.

Anyway the most important part of this is that they are releasing the Official Cover Art during the stream on October 31st on Twitch!  I am super excited for that and it looks like we also get a slight sneak peak with what the cover of the game might look like!  It looks like the game cover might be the entrance gate to the Salem Cemetery.  If this is what the game cover is then from this little bit I can see it looks amazing!  I can’t wait to see the full game cover released.

Thank you everyone so much for reading.  It's getting closer to the games official released and I’m super excited for what’s to come.  So what do you think of the Carriage House, and are you going to be watching the reveal of the cover art over on Twitch?  I would love to know in the comments below.