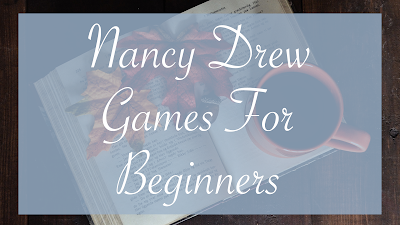 Whenever I talk about Nancy Drew games to others, they’ve always asked me which games they should play first.  Over the years, I have suggested so many games for people to play that I’ve almost lost track.  However, I always see to suggest these specific games when they are new to playing any

For todays post, I’m going to be sharing a few of my top picks of Nancy Drew games for beginners.  If you want to get any of these games for yourself then you can get them digitally from either the Her Interactive website or you can get them on Steam.  If you get them directly from Her Interactive you will receive a Free Digital Strategy Guide with your purchase, which is a great bonus!  For this list I tried to focus on some of the more easier games first as they increasing get more difficult.  So let get started!

"While snowed-in at the Wickford Castle Ski Resort you, as Nancy Drew, are trapped in a place that’s as strange as its history. The castle is a riddle, full of dead-ends and detours that hint at a legend left behind by Marie Antoinette! Solve baffling puzzles, search concealed rooms, interview evasive suspects, and sidestep danger on the hunt for a secret that the doomed queen was desperate to hide in Nancy Drew: Treasure in the Royal Tower."

This is probably on of the most easiest game I have ever play.  Its to the point that I’ve memorized each task and puzzle based off of memory alone.  The game focuses more on simple puzzles, a few secret passage ways, and the most important part of the game talking to the characters and snooping.  Even though you don’t have a checklist or notebook in this game, you can easily take your own notes and easily.


"You, as Nancy Drew, are invited to the Jersey shore to investigate a series of mishaps at the Captain’s Cove Amusement Park. First, the lead horse was stolen from the carousel. Then the roller coaster suddenly lost power, resulting in a serious accident. Now the merry-go-round is mysteriously starting up in the middle of the night. Will you be able to unravel the mysterious happenings surrounding this beautiful antique carousel in Nancy Drew: The Haunted Carousel?"

This game is very similar to Treasure in the Royal Tower, where most of the puzzles are logic based.  Though the slight difference was this game if played on Junior mode will have a check list on Nancy’s computer.  Overall this game is super simple and easy for new players.


"Ropin’, ridin’ and revenge. A ranch vacation takes a terrifying turn when a ghostly horse appears in this mystery game. Is it driven by the vengeful commands of its long-dead master, Dirk Valentine? Or is a living villain behind the ranch’s string of bad luck? It’s up to you, as Nancy Drew, to figure out who’s wearing the black hat before your investigation is ambushed in Nancy Drew: Secret of Shadow Ranch!"

I loved playing this game and for one reason alone.  This game is built to be played by completing certain tasks each day.  Because of this it make it super easy yet slightly challenge as you work to complete your check list.  This game is still a ton of fun as you get to live the life of a Rancher.

"It’s 1930 and Nancy Drew is asked to visit Emily Crandall, in Titusville, a girl whom Nancy knows only through a mutual friend. She and her mother had been counting on the generosity of their kindly but strange neighbor, Josiah Crowley, to leave them part of his estate to support the inn they own. But in his will, everything was left to Richard Topham, his ESP teacher. A contested will, a suffering girl, suspicious psychics — can Nancy solve the mystery before time runs out in Nancy Drew: Secret of the Old Clock?"

If you're a big Nancy Drew fan as me, then you know that the very first book in the yellow back series for Nancy Drew is in fact Secret of the Old Clock.  I always recommend this game first since so many people have heard about the book first.  I also found that this game is one of the more relaxed and laid back games.  You can easily relax and kick back and have some fun in the 1920’s.

"You, as Nancy Drew, go to Hawaii to serve as a research assistant to Dr. Quigley Kim. A devastating scourge is destroying the pineapple crop causing residents to whisper that a local research compound has awoken the legendary Kane ‘Okala. Upon arriving, Nancy discovers the camp ravaged and Dr. Kim missing. Coincidentally, the Hardy Boys are also on the Island to complete a top-secret mission, but it’s up to Nancy to uncover this intricate web of mysteries in Nancy Drew: The Creature of Kapu Cave!"

Thank you everyone for reading.  When I picked these games, its because I found them the easiest and more simple side of all the Nancy Drew games.  Some of the newer games are slightly more difficult which is why they aren’t on this list.  Out of these five, there are still another 27 games you can play.  Depending on your own personal opinion, some of that will be easier or even harder for you.  When it came to writing this post, I have also always found some of the older games easier compared to some of the newer games.  Happy trails as you go off to solve your next mystery!

Twitter   Pinterest   Bloglovin
Posted by Jordan: My Flourishing Retrospect
Email ThisBlogThis!Share to TwitterShare to FacebookShare to Pinterest
Labels: Game, Her Interactive, Nancy Drew, Secret Of The Old Clock, The Creature of Kapu Cave, The Haunted Carousel, The Secret of Shadow Ranch, Treasure in the Royal Tower