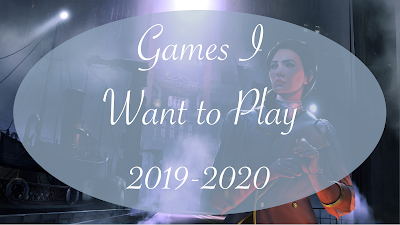 As we get closer to the end of the year, all these new games are being released soon and I honestly can’t keep count of how many of them I want to play right now.  So with that, I kind of wanted to put together a list of the games that I want to play that are coming out either either this year, next year, or possible in the foreseen future if they don’t have a date yet.  I also wanted to focus on game that I’m supper interested in as well.  So here’s a list of the 5 games that I’m looking forward to playing.

Nancy Drew Midnight In Salem
“Nancy Drew unexpectedly finds herself in Salem, Massachusetts investigating an arson on the Hathorne estate. The Hathorne House was originally constructed by Judge John Hathorne, inquisitor of the infamous Salem witch trials and the final home to 102-year-old Frances Tuttle, his last direct descendant. When Tuttle passed away, the estate became city property and while the mayor was seeking a manager to oversee the estate the home burst into flames.
The ongoing investigation has turned up little evidence but concerned citizens have accused Mei Parry of arson and are pressuring the police to arrest the secretive teenager. As Nancy races to uncover the truth behind the arson, she discovers connections to the house’s past with the Salem trials and finds herself drawn into a struggle with supernatural events that she simply can’t explain. Nancy’s convictions are put to the test. Are the ghosts real? Has Salem’s dark history come to life, or is there someone else to blame? Time is short, and Nancy must find the answers before the clock strikes midnight.”

I know, I know, I’ve literally said this game about million times over but I have been waiting very patiently for this game to be release and as each day comes closer the more excited that I get!  This game will be coming out on December 3, 2019, with an October 15th pre-order date, and in my book, that game is as well as purchased than any other game in my life.  If you want to get your own copy of the game you can find it here.


Firmament
“A gasp for air... a release of chilled breath... the crackling sounds of melting ice.
You wake in a glacial cavern — perfused by blue. It's crowded with metal pipes and adorned with curious, clockwork gears.
Echoing machinery resonates in your ears as a massive metal door opens before you...
As you enter a dark chamber, warm lights flicker to life, revealing a frigid, yet intimate stone interior, supported by riveted iron beams. In the middle of this room is an ancient table - a tea cup on one end and a frozen body slumped over the other. The corpse’s hands hold an exquisite clockwork device — held out like an offering.
You reach for the device, and suddenly… a small whir… a blue glow is birthed from its core as it comes to life and lifts from the outstretched palms of the rigid stranger. It hovers above you, watching.
An apparition appears with a message from the woman that left this gift. She planned to mentor you...
...but something has gone terribly wrong.
An immense, unexpected adventure now lies ahead…”

I have been playing games by Cyan Inc for as far as my memory goes back.  With Firmament, the game is a story and puzzle driven game.  At the moment we’ve just seen little tidbits as they continue to work on the game and so far I’m surer impressed.  I don’t know when the exact release day is yet but since I helped fund the KickStater with two other, we will be waiting for the day the game becomes available for use to play.  If you want to get your own copy of Firmament then you can find that here.


Close To The Sun
It’s 1897. Deep in international waters, the Helios stands still. Dark clouds loom overhead as unforgiving waves crash against the hull. Colossal effigies of gold, decorated with magnificent finery, stretch as far as the eye can see.
Born of Nikola Tesla’s vision, the Helios serves as a haven for the greatest scientific minds. An unbound utopia for research, independent from state and isolated from the gaze of society. Free to push the boundaries of matter and time.
Journalist Rose Archer steps aboard the Helios in search of her sister Ada. She quickly discovers not all is as it seems. Grand halls stand empty. The stench of rotting flesh lingers in the air. Silence. A single word is painted across the entrance... QUARANTINE!

This game looks super interesting.  The game is supposed to be released on November 5th, 2019.  I’m surprised that I haven’t seen more of this game, as on this month, this is the first time I’ve heard of this game!  That’s a travesty that I’ve only now found what I consider what looks like an amazing game only now.  This game reminds me so much of The Invisible Hours because it revolved around Nikola Tesla.  I can’t wait to test it out and once I can get my hands on it, I know that I will be playing it nonstop.  If you want to check this game out you can find it here.


Riddle of the Sphinx
The game focuses on you , a young archaeologist in Egypt who is searching for their mento, Sir Gil Blythe Geoffreys.

Now this is an old game.  A game I remember deciding to play and then, it broke right after playing it for 5 minutes due game not wanting to install properly.  However, now that this game is remastered for newer computers, maybe I can finally discover the Riddle of the Sphinx.  This game is very similar to Myst in a way with the 3D design and play style.  Also, back in April of 2019, Cyan also help point Old World Studios with how to remaster the game.  Now, I’m not sure if this game is released yet or not, based on what I see I believe that it is released.  I’m planing on helping fund the game soon as I can set something aside but for now I will wait and see what is to come.  If you want to check out this game you can find it here.


Laura Bow and the Mechanical Codex
Now this game has really peeked my interest.  I have never heard of the Laura Bow games up until someone that I follow on Twitter hit like on another post about the games comeback with a new fresh look with 3D graphics instead of the original pixel art.  After doing a little bit of research, I found that Laura as you could say is very similar to Nancy Drew with how they both solve mysteries, however, the similarities end there.  No much has been shared about this game except for a few promotional shots that that I found.  But hopefully we will get to see more soon.

Thank you everyone for reading.  There are so many games that I want to play but at the moment these are the ones that intrigue me the most.  Hopefully they will all be released soon so then I can play them all to my hearts content.  So, we're there any games that caught your interest from my list?  Let me know down in the comment below as I would love to know.