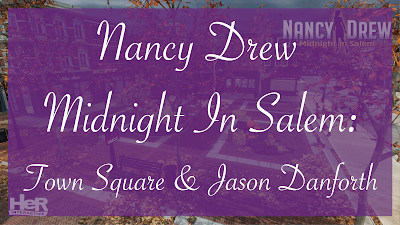 Her Interactive did it again this week by releasing two more images for the game!  To be honest, I didn’t think that they were going to be releasing anything this week and were going to keep up with posting game teasers every two weeks.  However, it seems that I’m wrong and they're going to be posting possibly two new images, per week, every Friday!


WARNING:  These images released are Early Renderings and are NOT FINAL!

The town square looks amazing! The amount of detail gone into the build of town is stunning and reminds me a little bit of Prescott, AZ with the statue at the center of town, with the small walkways, filled cute autumn decorations and autumn leaves.  Looking into the shop windows it looks like these aren’t completely finished yet so there’s a few hidden gems that we will be waiting to see once the game is released.  I also want to point out that the Miss Bow store second and third story windows on the far left look very familiar.  Like I’m getting a similar feeling to the window in The Phantom of Venice when you went to chase down one of the bad guys with the Italian FBI.


Jason looks really good here for an early rendering.  Compared to Jason's 2D drawing, his 3D drawing makes him look a little more baby faced.  Which is not a bad thing, but it definitely puts in line that he’s younger than what his 2D drawing was implying him to be.  In the 2D drawing he looked to be in his early 20’s.  Now, he looks more like he’s in is mid to late teens.  Probably about 15 to 16 years old if I had to guess.  Looking at the area behind him, he looks like he’s hanging around one of the shops at the town square or possibly somewhere near.

Both of these images are really making me question how big this game really is.  I’m not expecting it to be a big as some of the maps I have seen.  For example, game like Assassin Creed or Tomb Raider sized maps but with all these images showing different parts of the town make it seem so much larger than I anticipated.

Which in my opinion isn’t a bad thing, but now I’m wondering how all these part of the map will be connected together.  With there be jumping from one section of the map to the other, or will it all be open world concept?  I really hope its open world as that would be so amazing but I will be complete ok if it's the latter.  Now the only thing I can think about is all the tiny details I will be able to explore and see in the game!

Thank you everyone for reading!  These images keep getting better and better, and I'm not sure if I can wait for this game any longer.  If there was a way to get on Her Interactive's PR list for this game then please sign me up!  I really want to play this game.  I don’t even care if the only thing I was able to do is walk around for five minutes, that in itself would be amazing!