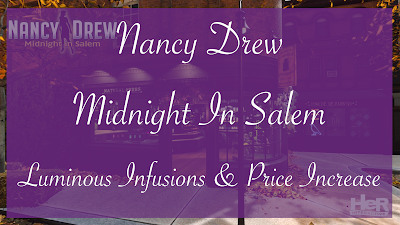 It should be no surprise now that another teaser was posted by Her Interactive.  After all, the last two post I’ve written about now have been surprise not only to me but to my blog since its kind of thrown off my blogging schedule since I haven’t had enough time to write my post for each set of images.

Today, I’m fully prepared by not only writing a small part of this post a week in advance, but I’m already 100% ready for the next update of images to grace our lovely screen as we stare at them in awe.

So there are two things we need to focus on today, the first is on the lovely image that has now graced all of our screens; the second is the change in prices for the game that they talked about over on their Amateur Sleuths Blog.
For the images, I had predicted Olivia Ravencraft and her personal shop over on Twitter were going to be released on Friday (9/20), but alas it seems I was sadly mistaken or in a way there was maybe a kinky switch since Her Interactive saw me tweet about my prediction.  Oh well, looks like I was wrong and now I’m going to be bumping my prediction it until next week.  To be honest, I new that I was probably going to be wrong but still fun to guess what they might do next.

This store looks amazing.  The building looks so real I feel as if I was actually there.  Which makes me super hopeful for a PS4 VR to be released in the future.  Getting to explore this game in VR would be amazing!

Her Interactive, I’m preparing my preorder for a PS4 version and I really hope it comes true one day.

Now, if we all go back to the image of the Town Square in the previous post, although you can’t see it, that’s where this shop is located!  So it looks like we will be spending quite a bit of time in the Town Square since Jason Danforth is somewhere near there as well.  Looking though the front door of the coffee shop, I can already imagine the smell of the coffee and the yummy goodies this store has to offer.  Maybe we might just get to eavesdrop on a bit of coffee shop gossip.

Price Change
Now, over on Her Interactive Amateur Sleuths Blog Little Jackalope announced that the game price will be increasing from its past price of $19.99 to $21.99.  To be honest I thought that they would want to charge up to $29.99 since that’s the normal asking prices for games now a day.  I’m completely fine with the price increase as there's more work going into the game.  It only like $2 to $3 dollars more than before.

Another thing that they also stated was that they only have a limited number of physical copies and that it will not be on retail shelves.  Though I have been buy their games directly from Her Interactive since 2011 with Alibi in Ashes, its very sad that I won’t be able to go to Walmart, Target, or any other store to see my favorite games sitting on the shelf.  After all the physical editions sell out you will still be able to buy the digital version of the game.  If you want to read the whole article Little Jackalope wrote then you can find it here.

Thank you everyone for reading!  What do you think of the new image?  I would love to know in the comments down below.  Also, are you planing on buying the Pre-Order Edition, which will hopefully have a few extra goodies, the standard edition after the game is released, or the digital version?