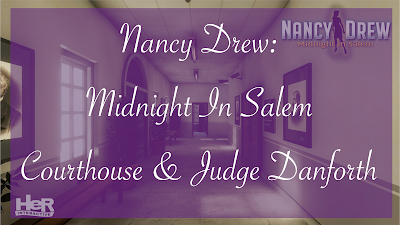 A week after teasing the last two images of the Hathorne House and Alicia Cole we get another set of images showing up more of the game.  To be completely honest I wasn’t expecting this to happen and I was completely unprepared, however, after a few hours of fan grilling about these images I’m back and ready to show them two you and share what I think of these images.

The first image was release on Friday is of the court house!  Now, we have seen a little bit of Courthouse offices in the game as Alicia Cole was in her new office.  If you look closely you can see a bit of her office it at the end of the hall.  The detail in the hallway makes it feel like this would actually be a courthouse hallway.  The detail in it is so amazing, I honestly thought this was the final render until the read Her Interactive’s tweet.

Maybe this was only me, but I thought Judge Danforth was taller.  The character design looks amazing, but I sense almost a sad look in his eye.  Like he’s tired and just wishes to move on from this chapter in his life.  Now this could be just the moment that the team at Her Interactive just captured oh him just sighing but I’m going to guess that he does have that feeling slightly since he is in fact retiring.

Both of these images look amazing and even though they aren’t final rendering of the game, it still shows how much work they have put into the game and how they are ready for Midnight In Salem to be released!

Thank you everyone for reading!  So, what do you think about these new images?  I would love to know in the comment below.  Since the game is only 23 days away from pre-oder and 72 days away from the release date, I believe that where going to be getting a lot more information about the game.  We might even get a new update or sneak peek each week about the game.  So this means a lot more Nancy Drew Midnight In Salem posts to follow!