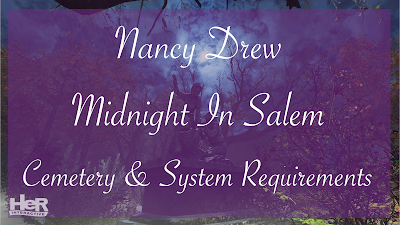 There are only 4 more days until Pre-Orders for Nancy Drew Midnight In Salem and I’m so excited for this pre-order!  I’m basically set my alarm to that I can buy my copy of the game the minute it goes live!  That and I am physically require to get up early for class, but that’s not the point of this post.  The whole point of this post to to go over the new images that Her Interactive released on September 27, the final set of images before the game goes to pre-order.
Over on my Twitter page, I decided to re-guess what images we would be seeing on Friday.  My guess was of course the same as last week.  I believed we were going to see Olivia Ravencroft and her shop, however, I was completely wrong again, which I’m ok with since we get to finally see an early render for the Cemetery!  We first saw the concept are for this as it was one of early images released this year.

This week we get two images for the Cemetery.  One of a close up version of the statue in the center and the second one is an aerial view of the cemetery.  This photo right here is just one of many reasons that I want to play this game.  It looks supper spooky with the dark cloudy sky, the sliver of moon lighting the foggy ground below, creating an unnerving presence of your not alone.

Now, I don’t know the origin of this statue but supposedly I heard that it's supposed to represent something in Salem, Massachusetts.  Now, I cannot find anything to support this claim but it could be the Her Interactive created this statue to have it represent what happened during the Salem Witch Trials.  If you know anything about the origins and meaning of this statue I would love to know.

After looking at this image my first thought immediately went to, “We have a big world to explore!”  I kid you not the this was the first thought that popped into my head.  Which for me is super exciting as previous Nancy Drew games are small in comparison to this game and what we’ve seen.  Back to the cemetery it looks amazing.  There are a few tombstones here and there that aren’t completely finished as they look a little flat, but then this is an early render.  This actually reminds me of an old styled cemetery that I used to see all the time.  Very well done.

Also if you look towards the front of the Cemetery, at the top of the image, it looks like we have another small styled town square.  Mind you, it not the town square that was released last week it just looks like it.  But since its a little to small to be that one we get another mini version one!

This is one of the most important things to make or break a game.  Can my computer run this game!?  The answer is for me at least is…. No… No I cannot….  Well that’s really sad…But no fear!  I have a back up plan for this.

If you're a Windows user you will need to have a minimum Process of an Intel Core i3 3.00 GHz or the AMD equivalence of it.  You will also need to run a 64-bit of Windows 7 or later.  For Mac users you need the same Processor of an Intel Core i3 3.00 GHz.  Mac users you need to be using the OS X 10.11 of El Capitan or higher.  You will also need a graphics card that is an Intel HD 4000, with 1 gigabyte (GB) of Ram.

Before you buy the game, I would highly recommend checking your system if you computer can run the game.  Thankfully I have another computer that meets these requirements and I might get luck if this game runs on my Bootcamp side of my Mac computer.  If not then I might need to look into saving money to buy a new computer to be able to run all these fancy new games.  If you have the right processor and graphics card then you will probably be able to run the game.

With the game going on pre-order on October 1st, expect an exclusive blog post about the trailer that will probably go live that day!  I’m going to start planing that post now so that I can get everything ready so I can give you my thoughts on the trailer.  So be on the look out for a new blog post on October 1st, at possibly 12 p.m. AZ time or even earlier!