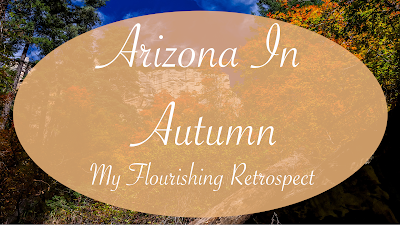 Autumn as officially started and for the first time ever, Arizona is joining them early with temperatures under 100 degrees Fahrenheit!  Its been so long since Arizona has been cooling off before December and this year I’m hoping to make the most of it!  For todays post I thought I would share with everyone a few Autumn activities that I plan on doing this year, if I haven’t done them already.  I’m really hoping to do all of these activities before the end of the season.


Travel Up North
I’m usually not one for traveling since that involves getting up super early to get driving.  However this year I think I will make an exception since its been so nice this year.  I would love to visit Sedona this year since its been so much cooler than normal.  The last time I went it was super hot and my family and I weren’t able to do too much because of it.  Maybe since I have more free time this year in college than I did my last two years I’ll be able to do it!

Go to a Pumpkin Patch
I haven’t done this since I was super little and to be honest I don’t really remember a whole lot from it.  This year I really hope I’m able to find one in AZ and pick a small one to carve.  Its very unlikely I will find one that is authentic since it looks like most of them were brought in.

Start Baking Autumn Desserts
I’m already planning all the autumn baked goods I can think of, apple pie, apple fritters, snicker doodles, and all the other warm and comforting desserts.  I love baking and this time of year I’m planing on doing a ton of it.  Hopefully I can try and practice cake decorating more this year since I really want to improve a few of my recipes and designs.

Wear Autumn Clothing
This is one of the thing that I haven’t done for a while which is updating my wardrobe to be more autumn themed.  I feel like in Arizona you're stuck in a cycle of t-shirts and shorts all year round except for those first three months in January, February, and March with is being cool enough to wear jeans and a light jacket.  Though I won’t need to pull out my super duty winter jacket any time soon.  I’m really looking forward to buy a few knit sweaters, long sleeve shirts, and jeans.  Hopefully I’m lucky enough to wear my high healed boots this year.

Setting Up Halloween
I promised this year I wouldn’t set up Halloween until October this year.  But because of how far the sun has moved, the temperatures cooling faster than last year, I just couldn’t help myself and not put Halloween up.  That and another reason why it got put up early was because I had to replace the tubs that was holding the decorations.  Now my house is super cute and pretty with purple strands of lights and pumpkin themed lights.