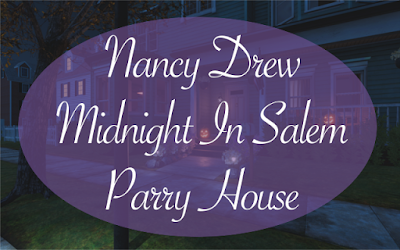 It finally happening!  We're getting our first look at what Her Interactive has been working on for Midnight In Salem.  On Friday, August 16 at about 4 pm PST, Her Interactive posted the first set of images of the Parry House!  So this will be the home for Mei and Teegan and it will probably give us a little bit of a background to the game or who these two characters are.  These are the first images that have been released to show what the game will actually look like using the new engine for the Nancy Drew games.  So let's look at those pictures!


The front of the house looks amazing!  The design, the colors, and the little details that are here are just amazing.  The cute little jack’o lantern pumpkins decorating the front porch really set up the scene of this game taking place during October, giving the player that spooky feeling that we’ve all been looking forward too.  Also, you can look in through the front windows and see the Breakfast Nook, which is the second picture that they released.

The Parry’s have a super cute kitchen/breakfast nook in the front of their home.  The design of the breakfast nook has a modern chic design, which shows a more modern look to the home.  However, I did notice though that some of the items in the room look little shinny/glitchy in some placed such as the ceiling, cabinets, and windows.

Note:
This could be that since the game is going to take place during nighttime that the color/lighting  of daytime they chose to show the room off might be a little odd.  However, I have no doubt that this will be polished before the game is fully released.

Both of these images for the game look amazing and I can’t wait until this game is released.  This game will be one to remember and with what I’ve seen so far it will be a great mystery.  When it comes to the next teaser release, I’ve also noticed a pattern that Her Interactive has been following over the last few weeks, they release a new little teaser of the game every Friday from either 12 pm to 5 pm PST.  So my Nancy Drew update post’s might be posted either on Friday a few hours after it goes live or on Saturday at noon.

Thank you everyone for reading.  The teaser images of the game look amazing and I can’t wait until we get more about the game being released.  These little things are making me super excited for the game.  I’m at the point of where I’m counting down the days until the game is released.  I would love to know what you think about these location in the next Nancy Drew game, tell me in the comment bellow.