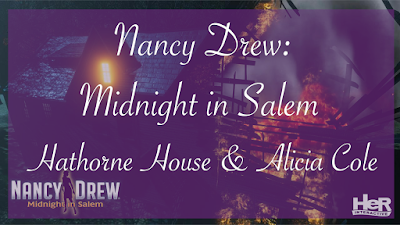 It happened again this week!  On Friday, August 30th, Her Interactive release 2 new images for Midnight In Salem.  I’ve been preparing for these new little bit and pieces of information about the game all week.  These are the second set of images released over the last two weeks teasing the up and coming game Midnight In Salem, before the game goes on preorder starting on October 1st, 2019.

With all these new images being release, its making me super excited to play the game!   As before I though I would share with everyone what I think of these exited images! So let's get started!


The first images presented to use is what I can only assume is the Hathorne House as it is ultimately bunted down.  The fire looks like its destroyed majority of the right side of the house.  This home looks like it was completely destroyed and that will probably make it very hard for us to go and investigate due to safety reasons.  Let's hope that we can get a peak at the damage done to the house while playing the game.  This also means that the house might have to be torn down and rebuilt.

The second images that was released was one of the new characters that was released this year, Alicia Cole.  From what it looks like this might be her office space or possibly Judge Danforth office.  Since she just moved to Salem she might not have her office fully set up yet, she might also be taking over Judge Danforth’s  office space.  This would probably explain why theirs an electric screw driver right behind her.

These images look amazing for them to be early renderings of the game and I can’t wait to see the final design of these characters, and the world they are in.  Since we’ve already seen the Parry House and Mei Parry (In the Midnight in Salem Teaser), hopefully we will get a few more character teasers in the up and coming weeks.  If you want to get a look at them yourself then you can find them over on Her Interactive’s social pages or on their website here.

Thank you everyone for reading!  These teaser are already making me giddy on this games release and I can’t wait to get my hands on this game!  We only have 30 days until Pre-orders begin on October 1st at 10 a.m. PST (MST) or 12 p.m EST.  What do you think of these in game reveals, let me know in the comments down below.