Is The Zork Remake Legal? 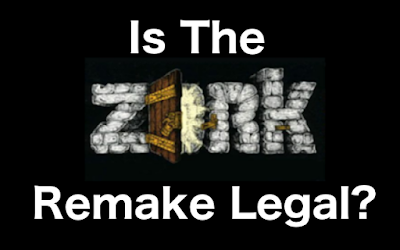 On the 5th of July, I wrote a review about the demo release of Zork 1 Remake.  A game that is basically a 3D version of the original classic 1980 game created by Activision.  Now Zork is getting a indie remake.  I did not put this in my original post, but I started thinking about the original copyright of the game, and I was wondering about how it would affect the publishing of the game.  Well in today's post I'm kind of going to go over a bit of what it would take to get not only this game published but the legal aspect of the game and what could happen if the game gets copyrighted.

Update:  The game name has since been changed to 3D Infocom Game 1 Part 1 as of September 2019.

Let's first start at the beginning.  As of now Activision still holds the rights to this game.  I have seen in past article and forms that they said that anyone can remake the games or add to the storyline.  However, this must be done without claiming any monetary value.  In simple terms, you can't sell anything Zork titled without get sued once they hear or see anything about it earning money, it's getting pulled.

So if the game gets sold for any dollar amount, for example, $5 or more dollars on Steam once the creators do a full release, they are very likely to get a DMCA (Digital Millennial Copyright Act) from Activision, then the game is basically toast and will most likely get removed from Steam unless something is done about it.

Now, if Infocom Remakes have the rights to the game, it hasn't been stated anywhere that they have the legal ability to charge anyone a fee for the game.  If they don't they might try to apply to Activision about getting licensing, however I believe Activision might not let go of the copyright.

Hopefully this game does not violate any licensing as I would love to get to play Zork 1 Remake with graphics.  However, if this game has a price tag then it's very unlikely that I will be playing it, as I don't want the game to get copyrighted and my money just disappear.

Update:
Since the game name what changed from Zork 1 Remake to 3D Infocom Game 1 Part 1 this completely changes things since the game is now a stand alone from the copyrighted name of Zork 1, which means, that fear of the game just disappearing one day due to copyright is gone!  So that means I might get the game hopefully soon.  Maybe when I decided to cave and buy a little gift for myself.

Thank you for reading everyone.  I'm still hopeful for this game and I can't wait to play it when I buy it.  What do you think about the game?  Tell me in the comments bellow.  Also, if you want to check out my review of the demo then you can click here to read it.