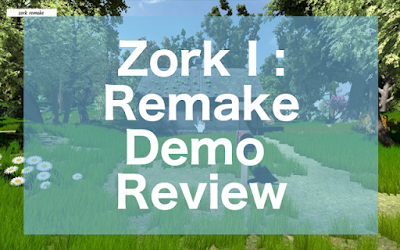 While looking at the Steam summer sale, I decided to go and look up a few older games that I loved when I was younger.  The game that I decided to look up first was the Zork Anthology.  As I already have all the games with the graphic, I decided to take a look the text adventure game again and consider adding it to my collection.  However, what I found instead had me jumping for joy.

Update:  The game name has since been changed to 3D Infocom Game 1 Part 1 as of September 2019.

I discovered that someone was created a Zork Remake!  A indie developer that goes by Ariel Love from the company Infocom Remakes has decided to take the original game of Zork 1, a text based game, and bringing to life the virtual world of Zork.

Well, as of May 9th, my prayers have been answered and the developers of this remake are about half way done with the game!  They have also released a short demo on Steam for everyone to play!  I had to play this demo to see how it plays out.  I have already played a portion of the original game, which kind of helped me understand what I needed to find or how to play the game in the beginning, but I'm always ready for an adventure!
Since this is only a demo, there is only so much available for us to play.  I will say that I went though each of the tasks very quickly as I knew where to look for everything.  At this time I believe that they only have the house portion of the map available, since I couldn't open the underground or the hatch that you can find on the map.
Without spoiling too much of the demo, I will say that this game all depends on you as the player and how you chose to progress though the game.  This is what makes this game such an amazing experience for players since it all depends on how you choose to play.

When it comes to the graphics of Unity, I have to say they are amazing as it makes everything so life like.  Small little details such as the chirping birds as well as the birds flying in the sky above.  I absolutely love little details like this.


For the house it's almost identical to what I imagined it would look like.  However I will say the one difference is the coloring. In the demo, it's gray instead of a faded white.  Due to the lighting and the color of the house, it makes it very hard to see the back of the house since the house is an important part of the game.  There also seems to be a glitch that when you're in living room you can exit the house through the wall while in the house.  I kind of found it funny, one minute I'm inside the house, the next I'm outside.


As for the world, I can see that there are a few things that are still being worked on.  For example, the amazing waterfall and the path way the leads from the river below to the top of the cliff.  I also of found a way past the map boundaries and almost fell off it... but then I also like finding these things so I can see what's on the other side of the map, even though its the part that I'm not supposed to be on.
Overall, I think this game is going to be amazing when its fully released and I can't wait to play the whole game.  I will definitely be keeping my eye on this game until its released so I can do a full proper review of the game.

Due to this being an indie developer I would have loved to add their social media and other information to this post, however I could not find any.

Thank you everyone for reading.  I'm super excited about this remake and I can't wait for them to release the full version of this game.  Down below, I have linked the Stream page where you can play the demo yourself!  If you've play the demo, tell me what you think in the comments down below.  I would love to know what you though of the little snippet we were given.