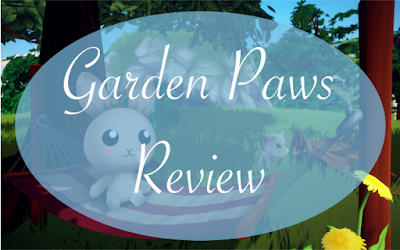 I don’t think I’ve every played such a cute game in my entire life!  When it comes to Garden Paws, this is one of the cutest farming simulators I have ever played.  The game, created by Bitten Toast Games Inc. focuses on you inheriting your grandparents farm, as they set off to travel the world.  You, as the player, work with Frank at the local construction shop to finish the final touches on your new home.  You can then aid Frank and the Mayor in building up the town and all of the potential it holds.

I first found the game while watching Twitch streamer, PatrckStatic, play the game.  Watching just a little bit of his game play, I knew that I had to play it for myself.  After play just a little bit of the game, I’m completely hooked.  I'm at the point of where I don’t want to stop playing it!  So let's get started!

I originally saw this game back in the summer of 2018 when PatrckStatic and two of his other friends, Molly (Foxtrot44) and Cerulikat decided to play the game with him.  When I first saw this game, I fell in love with it.  The game not only reminded me of Stardew Valley, but it reminded me of all the thing I would want in a farming simulator.  Which being in charge of your very own shop and watching your customers buy your items is something that I've always wanted.  What also makes this super exciting is that I can play this game with friends and we can build a farm together!

When it comes down to the storyline of the game, it all depends on how interactive you are with the community of the game.  Talk to the people around town, help them out with task and they will reward you with recipes, money, or even new adventures.  There’s so much you can do in this game it's unbelievable.  With this being said, I’m still in the early stages of the game so I haven’t gotten the chance to explore everything yet.  But, I’m excited too and I can’t wait to see what ahead.

When it comes to the graphics of the game, I will admit that it can be a little buggy.  But then it come down to two things.  One, my computer is slightly older.  Two, trying to max the game out on high with everything at its highest capabilities can cause your game to break.  Both of these things kind of caused the game to have the background have either a green or black sky which if you ask me was kind of funny to see.  However, the best way to fix this is to click on the button they have where everything is set to the lowest setting that also removes things that could cause your game to be slower, and or crash.  This made fixing my game super easy and now I can enjoy running around without the fear of the game crashing or being jumpy.

To be honest, within the first day of playing this game, I spent about 4 hours playing in one sitting.  Although sitting in one place for as long as I did isn’t good, I just couldn’t stop playing this game.  After about 3 days of play I’ve already reached up to about 9 hours of game play and I cannot get enough of this game!