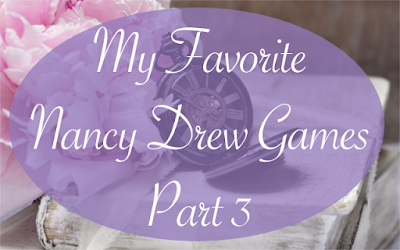 After looking over all the Nancy Drew games, I’m now on to Part 3 of this fun little adventure of my favorite Nancy Drew games!  This part will focus on games 21 to 32.  This is due to that there are only 2 games in the 30 and up games so all of this will be combined.  There are so many good games in this section and so many favorites that I love playing.

Same rules as before, the list is in order from older to newer games.  This helps make it easier for me to keep track of the games I have picked and its not because I favor one game over another.

Warnings at Waverly Academy
Have you spent enough time at school?  Well, now its time for back to School during Winter Break!  While your other classmates have gone home for Christmas Vacation, the only girls left at the school are the girls in the running for Valedictorian.  But with each girl that remains at the school, notes from the Black Cat seem to follow until they leave.  This game has to be one of my favorite new ones because I all the fun mini games you can play.  Especially since your snack shop boss and its your job to make snack for everyone once a day, after a while you get pretty good at it too.

Shadow at the Water’s Edge
Its vacation time ,and as a thank you from the company Krolmeister in the previous game, Trail of a Twister, we get a trip to go to Kyoto Japan where Nancy will stay at one of the Traditional Inn’s.  This Inn also has been know to be haunted.  With ghost hiding around every corner and scaring guest away its up to you to find out who or what is behind the haunting.  I have always wanted to travel to Japan and this game gave be a little bit of that with just a few things of what Japan would look like.  I also love all the puzzles in this game.  I especially love making Bento!  For a while it was super hard but now, I am a Bento Master!

Alibi in Ashes
It time to go back to River Heights, the town of the hero Detective as she and her friends try to solve the towns Clue”s Challenge, until Nancy is set up for arson as the old town hall.  You not only play as Nancy in this game but you can play as Bess, George, and Ned too as you try to help prove Nancy’s innocents.  This game is great as there is so much you can do weather its extra puzzle, traveling the town, and eating ice cream!

Ghost of Thornton Hall
This had to be one of the creepiest games I have ever played.  You are called by Savanah from Shadow at the Water’s Edge to help find Jessalyn Thornton, who went missing at the abandon Family estate for her bachelorette party.  It's up to you to find out if the Jessalyn got cold feet before her wedding or did something more ghostly take her away.  This has to be one of the scariest games I’ve played for a Nancy Drew game.  I’ve played this game so many times and I still get jump scared due to my lack of paying attention.

Sea of Darkness
This was one of the last Nancy Drew games to be release as of 2015.  You are invited to Iceland where you looking for the missing Captain of the Heerlijkheid.  It is also rumored that the Caption found a legendary treasure or that he was carried off into the night.  I found that this game was super close to the classic Nancy Drew games, thought I found some of the puzzles challenging, such as cooking or the dog toy puzzle, this game was so much fun to explore.

These games are amazing and I just love playing them.  The best part about not only these games but games such as Trail of the Twister, The Captives Curse, Tomb of the Lost Queen, The Deadly Device, The Silent Spy, The Shattered Medallion, and Labyrinth of Lies.  These are all great games and I would highly recommend you play them if you ever get the chance.