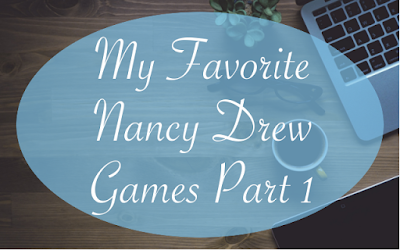 With the newest Nancy Drew game coming out in November.  I thought it would be fun to share with everyone what my favorite Nancy Drew games are.  Now since realistically, I can’t say what exactly is my number one Nancy Drew game for a few reasons.  One, I love all the games too much to pick between my favorites.  Two, this is like asking a parent to pick their favorite child when they have more than one child, it's impossible.

Now I’m going to split this post into three separate post since there are what I consider three eras of these games based on how these games have changed over time.  So for this post I will be sharing my favorite from games 1-10.  Now do note that I’m only putting these in order of the oldest games first to make it easier for me to keep track of them and its not because I prefer one game over the other.  So lets get started!

Stay Tuned for Danger
When I think of Stay Tuned for Danger, all I can think of is romance, danger, and drama.  Which sums up this game perfectly since you're trying to find who is sending the famous soap opera star death threats.  You get to go on set and investigate a place where lies and deceit are at the heart of the camera.  I could not think of a better game to play.  That and you can still get the digital version of the game over on Her Interactive’s website.

Treasure in the Royal Tower
Now this game might have a little be more of favoritism than the rest of the games.  First off, you're in a French Castle in Wisconsin as a blizzard hammers down on you and the guest staying at the beautiful ski resort, Wickford Castle.  While trapped in the Castle, you find that the castle library’s been vandalized, leading you deeper into the history of the castles about Marie Antoinette and the mysterious treasure.

The Haunted Carousel
Who wouldn’t want to go to a haunted amusement park?  Especially when it's shut down and you could ride all the rides?  Well, you can only ride the carousel and play midway games but it's still pretty fun.  You were invited to investigate the hauntings occurring at the park when it comes the theft of a carousel horse and the accident on the roller coster ride.  If you ask me I think investigating a haunted theme park is something I think I’m up for.

Danger on Deception Island
Whenever I play of this game, I think of Washington and the cool, cloudy, and rainy weather that I have always known the state for.  This game you're invited out to visit Katie Firestone, who runs boat tours.  However when a mysterious Orca whale shows up in the channel, everything is put on hold when Katie’s boat is vandalized with a threat about ‘stop meddling.’  It up to you so find out who destroyed Katie’s boat and discover the other secrets the luck in Snake Horse Harbor.

The Secret of Shadow Ranch
Whenever I play this game I always play it during the winter time.  First off, the game is based in Arizona during the summer time and it's hot, and during the winter time I’m missing some of heat.  Well, that is until it get above 120 F. then I want to avoid thinking about the heat.  If you're ready for the farm life of tending the vegetable garden, feeding the chickens and horses, then this game is one to play.  While you're giving a helping hand you can also find out why Bet and Ed Rawley are getting scared off their ranch, caused by accidents happening after seeing Dirk Valentines horses appears.

Though games such as Secrets Can Kill (Original & Remastered), Message in a Hunted Mansion, The Final Scene, Secret of the Scarlet Hand, and Ghost Dogs of Moon Lake didn’t make my top 5, I still love these games too as they are all amazing.

(Even though the Original Secret’s Can Kill is no longer available, its remastered version is still super fun.)

Thank you for reading everyone.  I hope you all enjoyed finding out about my favorite games in the first set of games.  To be honest this was so hard as all the games are amazing and they each have one thing in them that I love, but these are always my go to games when I’m looking at games 1-10.  So out of these games, what is your favorite?  Or do you have a different game out of the first 10 games that you prefer more?  I would love to know in the comments.