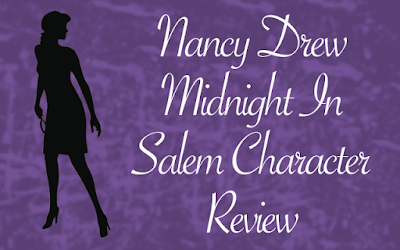 With all the new Nancy Drew: Midnight in Salem characters that have been released since February, I believe that its time to do a character review!  This game probably has one of the most characters, with it topping out at a total of 10 characters!  It's amazing how just how many characters are in this game, including the characters that are suspects and friends in the game.  Which if you ask me, makes it a perfect excuse to start studying every character and see which character needs to be at the top of my suspect list.

Now, due to the short description of characters, I cannot make a full profile of each character.  I can only guesses of what I think of each based off of there description.  I also made a list of people who will definitely be helping us solve this case which of course will be Deirdre Shannon and The Hardy Boys.  So let's get started! 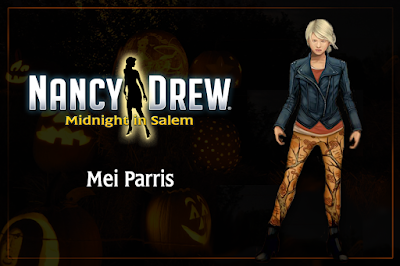 Mei Parry (Accused):
“Mei Parris has spent her life pulled between two extremes due to her physical appearance: the near-crushing protective attention lavished on her by her parents, and the unjustified fear of the local townsfolk.”

First off, we are called to help Mei so she is definitely is not on our suspect list.  However, she is in a way the victim of this incident as well as Jason since he was the one locked in the house as it was set on fire.  Due to her physical appearance and the way the town has treated Mia, she might be someone who keeps things to herself and it might take her a bit to trust Nancy.  As well as not be very forth coming with all that she knows.  Only time will tell.  However, I believe that someone is setting her up as a scape goat for this accident due to their ulterior motive because of the building. 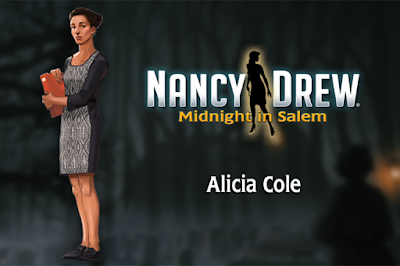 Alicia Cole:
“Alicia Cole is a highly qualified attorney who left the big city to work with the soon-to-be-retired Judge Danforth. She loves the area and finds the smaller town environment more to her liking. However, in Salem, she must learn to deal with the occasional ‘she put a spell on me!’ case, especially behind the backdrop of a community that hasn’t come to terms with its dark and haunting past. Have the residents’ superstitions influenced Alicia’s judgment or do her ambitions run deeper than she lets on?”

Alicia Cole probably has one of the largest bios of all the characters in this game so this first of makes me really question her role in the game.  But this could be just throwing me off the trail.  Alicia seems to be new to the town of Salem as she is taking over for Judge Danforth.  It's possible that she may use this opportunity to send Mei to prison just to win the town over?  At the moment this is a very big possibility but we will just have to wait and see. 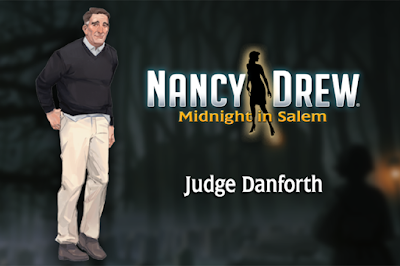 Judge Danforth:
“The well-established, yet somewhat scatterbrained, Judge Danforth is at the center of pressing legal battles in the town of Salem. The arson of the famed historic Hathorne Estate is under investigation and citizens want justice. But could Judge Danforth be harboring a hidden agenda to disrupt the investigation?”

When it comes to Judge Danforth, I’m not all sure about him.  The fact that they describe him as a scatterbrained makes me question him more.  This is kind of description leads me to that he’s a happy go luck kind of man thats a huge push over.  This man being a Judge really makes me question why he’s a judge in the first place.  Is he hiding a secret behind his happy go lucky personality?  This is something that I'll be focusing on when they release the game. 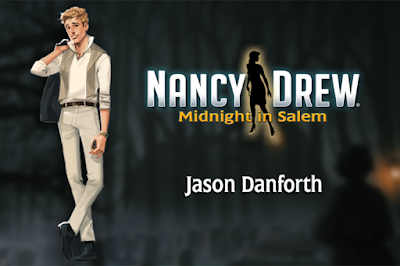 Jason Danforth:
“Jason Danforth is the son of Judge Danforth. As a child, Jason loved to play in and around the infamous Hathorne House. Even though the people of Salem speculated the estate was haunted, Jason continued to visit until one day, when he was ten, he witnessed an unexplained sighting, one that haunts him to this day.  As years passed, Jason enjoyed being the “it” guy in town and being both wealthy and handsome. Some say that Jason is his own biggest fan.  For Jason, position has its privileges, but does his status mask the curse of his past?”

Jason, who is our second victim, who was locked inside the house during the fire.  When I first saw Jason my first thought was, wasn’t he supposed to be a child?  I was completely shocked about his appearance, not in a bad way, but my in my mind I was thinking a 8 to 12 year old little boy who has helplessly trapped in the building.  This completely changes everything I was thinking up until this point.  Due to his “good looks” I believe that he probably could manipulate quite a few things, including situations that don’t go his way.  Because of this, it completely changes what I though about Jason when I was writing  "What Do We know About Nancy Drew: Midnight in Salem" post. 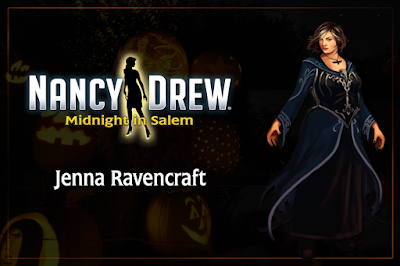 Jenna Ravencraft:
“Constantly commanding the spotlight, Jenna Ravencraft runs a local paranormal tour company. It’s well-known locally that her tours are faked (or are they?) — full of rigged special effects designed to showcase spells and ghosts.”

Jenna Ravencraft, with what I believe is one of the most interesting characters here.  She owns a paranormal tour and for Salem and there seems to be plenty of ghosts haunting about.  Now the question is, is she actually finding ghosts or creating them for personal gain.  I also get the feeling that she probably isn’t very well liked because of her business, but why do I get the feeling that she probably caused most of her hauntings with her tours instead of finding them.  Maybe while she was looking for the paranormal she found something else instead that she wants for all for herself. 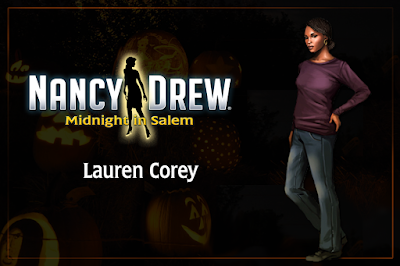 Lauren Corey:
“Lauren Corey is a calm and slightly grouchy introvert with a bookworm streak. She loves to bake, and is beloved in the local community for her winning entries into cooking contests.”

Now Lauren introvert personality tells me that she is big on keeping secrets.  She probably has seen so many from the shadows that she could probably be a book of information in the case.  Well, that depends on whether or not Nancy can persuade her to tell us what these secrets are.  She many even have a few secrets of her own that Nancy might need to know. 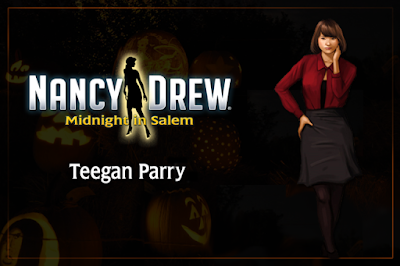 Teegan Parry:
“Teegan Parry is easy to like: outgoing, cheerful, extremely fashionable and professional. But when Teegan’s stressed out, she has an incredibly short fuse before her temper ignites.”

When I first read her name the only thing I can think of is Detective T. K.  Parris from Nancy Drew: The Haunted Carousel.  Teegan is described as an every day extrovert.  She probably will be very helpful to spread gossip like wild fire and seems to get along with everyone she meets.  But I do believe that if we push her buttons too much, it's possibly that her anger will probably be the deciding factor if she can persuade the town to kick Nancy out. 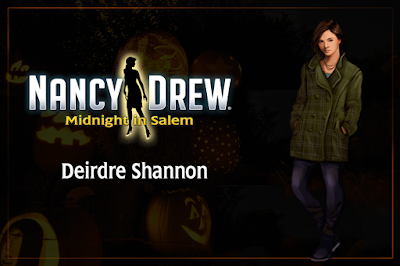 Deirdre Shannon:
“High-maintenance Deirdre Shannon has spent her life hovering in Nancy’s shadow, and lives with the knowledge that she is the “girl who would have become Nancy Drew” had circumstances turned out better for her.”

Now Deirdre was the one that called Nancy out to Salem so she definitely is not on the suspect list and she could be one of the most helpful people here.  Due to her knowledge of the town and her best fried Mei.  Though she will probably will be stand offish with Nancy, I believe that her automatic defense will weaken as Nancy begins to uncover clues. 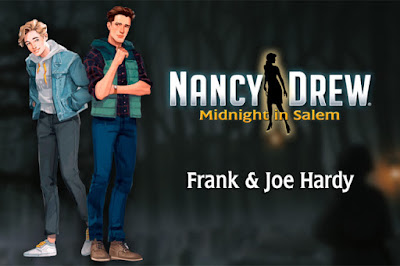 Frank and Joe Hardy:
"Now, Frank and Joe Hardy have to be one of the most anticipated characters we have all been waiting for.  They will definitely be a big help when it comes to solving the mystery and hopefully they might influence the game with the two of them investigating with Nancy.  The one thing that I really hope is that they will be playable characters like in "The Creature of Kapu Cave."

Thank you everyone for reading!  I can’t wait to play this game and it's only a matter of time until the game is released.  My hand I eagerly hovering over that pre-order button as I want to confirm that I get a pre-order copy of the game right when its released!

Also if you look at the game page for Midnight in Salem you can also see that Her Interactive says that there will be a new teaser trailer for the game!  I can’t wait for that to be release!  Though there is no release date for this, I have a guess on when this trailer will be release, I’m guessing possibly sometime in the middle of April or later.  If you want to  look over the characters yourself you can click here or go to Her Interactive's  website to see all the characters.