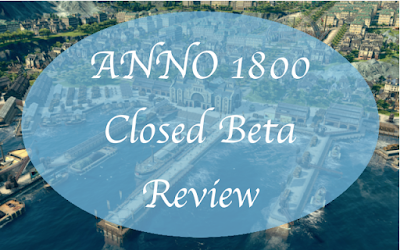 I first saw ANNO 1800 sometime around 2018.  I had been watching one of those simulation games to look forward to in 2019 when I first stumbled upon it and it really peeking my interest.  My interest in the game was renewed after watching a video by Keralis that he recorded last year.  Which I ironically watched a week before the Close Beta was to be released for a few short days.

At this point, I had never heard of the ANNO series before seeing these two video, though I had probably had played a majority of simulation games.  I think the one thing that peeked my interest about this game had to be the 1800 style themed.  The designs of the buildings were amazing and so beautiful I just couldn’t get the game out of my head, I just had to play it.  Well, on January 31st - February 4th I was able to get my hand on a key to the closed beta thank to CORSAIR, which was given a bunch of keys to the games beta from the Ubisoft Blue Byte.  So now, for todays post I’m going to be sharing what I though of this beautiful game.

Before I go on, this was not the full game, it was only the sandbox mode with limited features.  I will be writing another review once I buy the full version of the ANNO 1800 game.

First off, when you open the game you are greeted by some of the most beautiful music I have ever heard in a game.  The tone reminded me a bit of what the Sims Medieval had, but the ANNO 1800 music truly stood out on its own.  When it come to the graphic, they were so pretty.  I couldn’t believe the amount of detail I was seeing.  Even when I had to turn my graphic to medium, they were still so beautiful.

Now for the playing aspect, you could say I got just slightly a little lost.  Now this is because I had never any play any ANNO games before, and with each simulation game, the playing aspects between games are all different than what I was used to playing.  When I first started I turned on the tutorial mode, but it seem that the tutorial kind of just stoped.  Now this could be for a multitude of reasons with one being that I wasn’t completing something that it was asking me, it could be that I finished the tutorial without even knowing it, or my favorite, game glitches.  Hopefully that this was just an error due to game glitches because when it came to the ship or naval feature, I was completely clueless on what to do and how to work this portion of the game so I can't wait to play with it when I get the game.

Th building portion of the game was very easy to learn and I was slowly starting to catch on on how to play this game.  I think the most challenging part of this game was to choose between innovation or the beauty aspect of my game.  It was definitely a hard thing to balance between since some wanted innovation while other wanted to keep as much of the greenery as possible.

Now I wasn’t able to get past the worker stage in my play though because of time constraints, however I was able to convince 2 of my family to play the multiplayer with me and it was so much fun.  However we weren’t really sure how to interact with each other.  Now this also goes back to no knowing how to play the game to its full extent, however I’m looking forward to playing this game with them again and trying to figure out how to work together in improving our cities.

Thank you everyone for reading!  I had so much fun playing this game even though I had no clue what I was doing most of the time.  I cant wait for the full release of the game when I can play the storyline side of the game as well as play around with more of the sandbox and multiplayer mode.  This game is something I play on sinking quite a few hours in to build up my city to what I can dream it could be.  I am playing on playing the Open Beta when it is release on April 12th -14th before the game is fully release so I am really looking forward to that.