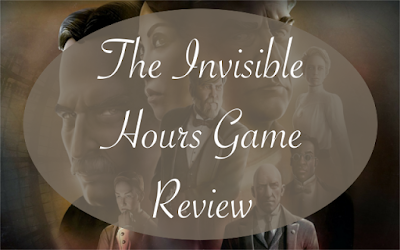 When I first saw The Invisible Hours trailer 2 years ago I was super excited for this game.  This was one of the first VR games that really peaked my interests as it was the first VR game that I saw that held such a captivating storyline.  After finally bidding my time I was finally able to get a physical copy of the game, which surprisingly was hard to find but I’m super happy I did.

The game is narrative VR game where you as the player, are invisible to all of the characters.  You basically become a fly on the wall watching each character as they navigate their way through the story.  Now let's focus on the plot of the story.

Without giving too much of the storyline away, the story first starts on Gustaf Gustav, the detective of the story.  As he arrives on the island he walks upon the murder of Nikola Tesla, the world famous inventor.  As the storyline unfolds you as the fly on the wall can watch the house guests and employees of Tesla to find out who is the murder.  There are a total of 6 people at the home at the time of the murder.  The people at the home during the murder are Flora White, Thomas Edison, Augustus Vanderberg, Oliver Swan, Victor Mundy, and Sarah Bernhardt.

Now while playing this game with Daniella, we chose to take the path of watching each and very person before moving on to the next chapter.  There are a total of 4 chapter each expanding the storyline on what happened after Tesla’s death.  After doing this for the first 4 people we found that it was a good idea that one of us transcribes important information while the other one plays.  Each person spoke or acted a certain way that we either found interesting or odd.  By writing these facts down, it allowed us to understand them better as a character if we could put the piece of the behavior together.

I found that the storyline was very well written and you could say I felt as if I was watching the story unfold before my eyes as I watched each character interact with each other.  I felt as if I was watching a TV show or a movie on set.  This game also reminded me of Agatha Christie’s And Then There Were None.  It really gave off a similar vibe to that story when it came to the island in the middle of know where.

The graphics were flawless on the TV screen, except in the VR but that not with fault with the game more of the head device but still the visuals in the game were flawless.  After playing for so long I began to feel as if I was literally in the game and that this was the world that I was able to immerse myself into.  I had such a fun time playing this game and I can’t wait for play another game like this.  I cant wait to see what other games Tequila Works makes for the VR and I’m really hoping for another fun VR game like this from them soon.

Maybe they could even create And Then There Were None in the VR which I would love to play.   Especially if we as the player are able to interact with the characters instead of just watching the storyline unfold.  I believe this could add great depth to the story and it would make it super fun.

Thank you for reading everyone!  I hope that you all enjoyed my review of this amazing game.  If you haven’t played this game yet I highly recommend that you do.  Its one of the best VR games that I have ever played and I can’t wait to play another one just like this.