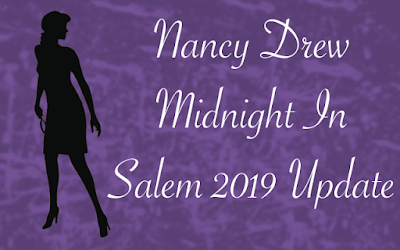 Well, it's that time again where all the Nancy Drew fans freakout over new information involving Nancy Drew Midnight in Salem.  In my last Nancy Drew post about Midnight In Salem I talked about my theories on what we know about the game.  Basically, my overview of the storyline and the characters announced for the game.  Which if you haven’t check out yet, I would highly recommend you do so click here if you haven’t read it yet.

Now back to the big news!  Her Interactive released on January 4th, 2019 in their December Newsletter a very important announcement.  In their newsletter they stated that, “We want to take this opportunity to update you on Nancy Drew: Midnight In Salem. We are now targeting a release date of Spring 2019!  We know many of you have been patiently waiting for this game, and for that, we thank you!”

This is great news!  Back in December of 2017 they announced the projected date of a Spring 2019 release date and now they’ve finally confirmed that they will in fact release the game This Year!  I know that many of us were holding our breaths on this one waiting for a 100% confirmation on whether or not this was going to happen and it seems that it is!

“This versatility means that the design and development of our games are even more complex than in the past. Our PC/Mac game design will work for players on the go with tablets and possibly for players that may want to immerse themselves in the mixed reality world. We are also constantly evaluating new technologies and trends in the game industry. Consequently, this is why it is taking much longer to develop this title than previous ones. This thoroughness will put HeR Interactive in a better position for the future while providing us with the tools necessary to continue to deliver amazing experiences for our fans.”

This is great news on the fact that they are releasing the next game on so many different devices.  I would love to be able to play this game on a iPad, iPhone, or other mobile device.  This will definitely make playing the game easier if you’re on the go.  Specifically, while I wait for my college classes to start.

What I’m really excited about is the possibility of VR coming into play.  For the longest time, I have always thought that bringing VR to Nancy Drew would be amazing and it looks like this might become a reality!  Who knows but if it does, my blog may go into silence for a while as I am too obsessed with playing the game in VR. 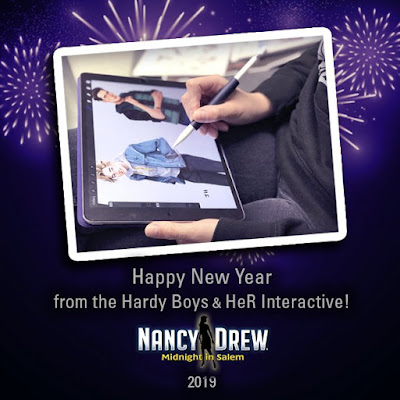 Now the very last piece of news that Her Interactive release was over on there Twitter page or at least thats the first place I saw it, while Daniella saw it in her email and then showed it to me.  They announced that the Hardy Boys were going to be in the game as physical Characters.  This was something I predicted back in October due to the lack of characters in the game and the fact that the Hardy Boys also joked about witches in Labyrinth of Lies predicting their return.  Now we all know that they will never be on my suspect list, I can’t wait to see what they do to help Nancy in the game.

Now this makes me question one thing.  Was Nancy planing on meeting the Hardy Boys in Salem, Massachusetts to have them help her with the case.  Or was it just a coincidence that they happened to be in the same place at the same time?

My prediction was that Nancy and the Hardy Boys were planing on meeting up in Salem Massachusetts to work on the case together and hang out afterwards as they implied in Labyrinth of Lies.  They could also be working on their own case at the same time as Nancy and their cases could become intertwined later down the line.  Well, one day we will know the answer to this question.  “Time will tell!”

If you want to read the full Her Interactive’s December newsletter you can click here to read it!  As before, if there is any new news about the game, you can expect that I will do my best to write about it as fast as I can.  Specifically, when it comes to the Nancy Drew Midnight in Salem trailer not only sharing more about the game, more information on the release date, but also showcasing the new voice actress for Nancy Drew.  They have still kept their lips tightly sealed about who the new voice actress is, but hopefully we will soon know who she is so we can give her a proper and warm welcome to the Nancy Drew Family!

Thank you everyone for reading.  Tell me what you think about the Hardy Boys joining the Midnight in Salem crew.  Are you excited about the Hardy Boy’s joining the cast of characters in the game?  Once any new information is release on Midnight In Salem, I will make sure to write a post about it once it becomes available.  Hopefully the next piece of information will either be the release date, more characters, updates on what devices you can play the game on, or the most important: the trailer for the game!