What Do We Know About Nancy Drew: Midnight in Salem 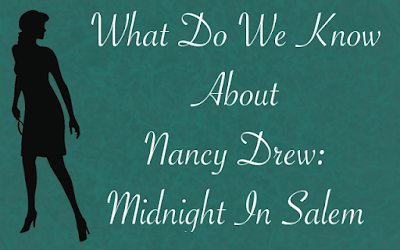 In possibly 6 to 7 months from now, the next new Nancy Drew game will be released.  It’s been almost 4 years since the last Nancy Drew game was released and I am super excited for its.  Now before anyone starts to complain “Why did it take forever to make Midnight in Salem” or bash the game at all, let me tell you something before we break down all the information we know currently about Midnight in Salem and we go over my own theories on what could happen in the game.

“GAMES CAN TAKE YEARS TO MAKE!”

Now let that sink in first before you finish reading my post.  If you’re more than the casual gamer, then you know that games that use the Unity engine can take years if not more to make.  Games that use the Unity Engine like Dreamfall, The Tomb Raider series, and the Myst series, just to name a few, have taken years to make or, in one case, remake. So, if I see anyone comment here and complain about waiting, you’re getting the boot.


So back to the game, what do we know as of now?  Well the game is going to take place in Salem, Massachusetts.  Deirdre Shannon called Nancy to help her friend, Mei Parris, who she was afraid would not survive this situation.  This game has also been linked to the novel Nancy Drew Mystery Stories #33 The Witch Tree Symbol.  Though, I have not read this book, I can see a few similarities based off of the book description.  However, the book states that Nancy is to be the rumored witch instead of Deirdre’s friend Mei Parris, and that Nancy is trying to capture a thief.

Back to the game storyline.  It states that the Hathorne House that was owned by the infamous Salem Witch Trials, Judge John Hathorne, and the final home to Frances Tuttle. After Tuttle’s passing, the Manor became city property and will be used as a tourist attraction.

As most older homes with a history goes, this one fits the bill to a T.  Now based off of what we do know is that there are 5 female characters in the game. Two of them being Deirdre and Mei. For one, I’m not really sure how all of these ladies are tied into the story and how they each affect it right now. But I believe that it is impossible that these ladies are the only characters in the game.  I believe that there are probably 2 other male characters or 1 man and 1 boy that are left out of the game.

Judge Steven Danforth is overseeing the proceedings to the house.  Meaning that he must be an unannounced character since the situation involves his own son, Jason.  Whether or not we will actually see him in the game or if he is just mentioned has yet to be confirmed.  Jason was rescued from the house on October 21stby the police after he was locked in the estates upstairs Library as it began to burn.  However, Jason remembers nothing about how he even entered the room.  Though he does not remember much of the event that led him to the library, he does remember seeing a frightening expressing from a “vile ghostly woman” who watched and spoke to him from the fireplace flames.

This, to me, is a very big red flag!  Before I start spewing who I think a culprit is (it would be impossible without any evidence), I think we need to think of all the possibilities of how Jason could have entered this room.

My first theory is that he was told to go there.  Whether by choice or not is still in the air.  He could have been told by someone, he could have been following a note telling him to meet someone there.  Either way, the fact the boy does not remember could be a sign of traumatic stress leading him to forget.  The fact that Jason remembers seeing what he believes to be Mei is surprising.  For Jason to see her, it could be that she was trying to help him escape the fire in the library, say from a secret passage way from the fire place, or his imagination was running wild.

Remembering back to Ghost of Thornton Hall, if the house had any health concerns such as carbon dioxide or any other chemical that is dangerous to the body that could cause illusions of seeing things that aren’t real.  This could fit in Jason’s case if there was anything of the sort.

Now, police were able to save the boy from the fire quickly because neighbors called before the fire because of Jason presumably dancing in the street.  Was this truly an accident?  Also, why would a young boy be dancing in the street?  When you think about the Salem Witch trials and how the young girls would dance around in the forest, it makes sense history wise.

This part about Jason dancing in the street really has me stumped.  The only thing I can think of is that Jason was happily going to the estates Library by choice, not by force, since the dancing implies that he was happy about the decision.  Also, would Jason lie about how he got there feign ignorance to possibly protect someone else, a friend that he might get into trouble?  If the boy looks up to this person then this would be the only reason he described what he believes to be a ghost woman, and that Deirdre’s friend Mei just happened to fit the bill.

Do I believe that Mei is a witch?  No.  Do I believe in a circumstance of an easy blame because of her appearance?  Yes.  The town seems to be very superstitious and are using this as a quick blame game.  I believe that someone who doesn’t believe in magic is using this to their advantage.  Maybe they are mad that the manor is being used in a way they don’t approve.  Maybe, they wanted to own the house, however they were left with nothing when Frances Tuttle died, when they were promised the house or whatever secrets that were hiding inside those old walls.

This game is also rumored to have the Hardy Boys in it. Not just as friends you can call, but as physical characters.  One of the interns from Her Interactive, Ellie from 2015, also hinted in one of her videos that the Hardy Boys may join Nancy in this mystery.  Going back to game 31: Labyrinth of Lies, Frank and Joe mention to about meeting up with Nancy.  Was Nancy going to meet up with Frank and Joe in Salem when Deirdre called Nancy to help Mei?  We will just have to wait and see!

With the other leading ladies, since I only mentioned them briefly in an earlier paragraph, I am really curious on how they tie into the mystery.  Two of them are Teegan Parris and Lauren Corey.  Each of them has very little written about them. Lauren Corey, not to be confused with Ingrid Corey from The Haunted Carousel (Though, it’s not confirmed that they are related or know each other.).  It says that Lauren is a calm and slightly grouchy introvert and a bookworm. She has also won many of the community’s cooking contests.  So, based off of the bio, there’s not much to tie her into the game.  For Teegna Parris, it describes her at an outgoing, cheerful, extremely fashionable, and professional.  However, when she gets stressed out, she will become short fuse before her temper ignites.  Again, there’s nothing really mentioning how she ties into the game.

The final character, Jenna Ravencraft, is the owner of a paranormal tour company and has been believed to fake her haunted tours. This ties her in perfectly with the game.  She believes in the paranormal and that leads me to believe that she believes or practices witchcraft.  She could be mad that she didn’t get ownership or rights to the house to help improve her paranormal touring company.  In my opinion, she is the highest on my suspect list because of the evidence that we currently know.

Only time will tell…

Thank you all for reading.  I hoped you enjoyed all my theories about the soon to be released Nancy Drew game in Spring of 2019. Also, thank you Daniella (The Little Book Spy) for helping me with a bit of the information on the Salem Witch Trials. I cannot wait for this game to be released and I will be posting regular updates on any of the news Her Interactive provides.  Especially when it comes to new characters, game information, release dates, and more. Tell me, do you agree with my theories? Or do you have some of your own on what’s happening in Salem, Massachusetts?  Please tell me in the comments down below, I would love to read them.