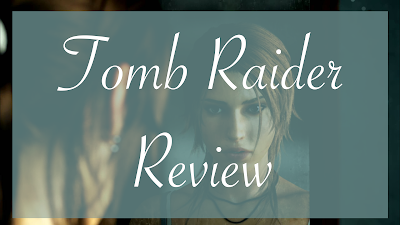 Over the last few years, I’ve been playing quite a few RPG games.  These games have been so much fun to play.  One of my top games that I loved playing was the 2013 edition of Tomb Raider.  I was originally recommended this game by Little Jackalope at Her Interactive while they were live streaming one of their Nancy Drew games. She raved about how good it was and so I decided to try the game.  I bought a copy during the summer sale back in 2016 for $4.99 dollars and just recently bought it for the PS4.  So let's get started!
The game focuses on the storyline of Laura Croft and her first expedition aboard the Endurance looking for the lost kingdom of Yamatai.  Her team adventures into the Dragon’s Triangle where the ship is struck by a violent storm causing their boat to be destroyed.  The survivors are now stranded on an isolated island surrounded by deranged savages from other ship wreaks.  Laura’s friend, Sam, is later captured by the leader of these deranged men, Father Mathias, where he plans to use her as a sacrifice.  It’s up to Laura to save Sam and find a way for her and her friends aboard the Endurance to escape the island.

Graphics
The graphics for this game were amazing.  At the time of me playing this game my had a slightly older computer which made it difficult to play on higher graphics settings.  Still with the low graphics the game look so clear and sharp.  Everything also look so realistic to the point of where some of the more gross areas of the game made me cringe.

Storyline
I love watching Laura’s story in the game.  In the beginning we see Laura as a helpless/confused characters that just wants everything to be ok.  While playing the game you can see as she grows as a character.  Instead of letting other tell her what to do, she’s the one taking in charge and trying to protect everyone that was on the Endurance.  This game really showed her growth of not only Laura but from the other characters as well.


Gameplay
When it came to the game play, everything was super clear to follow in the story.  There were a few times in the game where the big bosses, or story challenges were difficult but I really enjoyed trying to figure these out.  I also loved exploring the tombs and trying to solve those puzzles.

Thank you everyone for reading!  I really enjoyed playing Tomb Raider and I can wait to play more of the story.  If you want to play the game for yourself then you can get the game on Steam, PS4, and Xbox One.  So have you played Tomb Raider?  I would love to know down in the comments below.