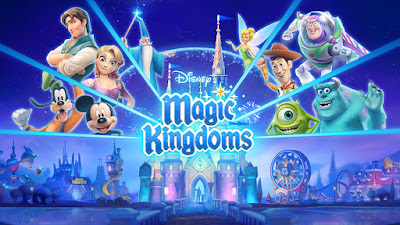 So, for over the last year I been a little game called Disney Magic Kingdom.  This game is one of my most favorite iPhone games I have played to date.  The main focus of the game is about building up your kingdom theme park with characters from your favorite Disney stories along with place rides, attractions, and stop the evil villain Maleficent from stealing all the happiness in the kingdom.

I first started to play this game back in January 2017.  Before that though, I had received advertisement from other games that I was playing on my phone telling me this is a game that you would love.  To be truthfully honest, at first, I wasn't interested really in the game and just ignored the ads for the most part along with the other ads from other games.  But after about 6 months’ worth of ads about the game I just decided to download it and try.

Now the exception about this game is that the missions you will need to send your characters on is timed.  As in it might take 1 hour or less if you’re just starting out, or it could take as long as 24 hours.  Which I might add is the long time for a mission I have ever done.  Since this is a free mobile game you can understand the idea of why it takes so long for anything to get done.  The creators don't want you to finish the game as fast as you can.

About each and every month or so the creators have little events for what they consider special characters where you have approximately about 26 days or less to earn a set of characters.  Sometimes you might have to fight a villain and others are about saving the main character. For example, the Winne the Pooh event was set up to where all his friends needed to save him from the honey tree that be became stuck in.

Though these events are fun, the creators of the game do make it very hard if you aren't constantly checking the game.  Sometimes you won't ever get all the characters before the events end.  If this happens to you don't worry.  You can still get try and get the characters with special event chest.  You can buy these either with diamonds by watching 2 ads a day (one diamond each), buying diamonds with real money, or you can buy the chest with real money. If you do go this route you will get 5 chests for the prices of $9.99 in U.S. dollars.  The possibility of earning a character is very low except if you pay for the 5 chests which grantees 1 character with the purchase.  In my opinion I would just stock up on diamonds from ads and upgrading characters.  I would also just use these diamonds during events to get the special characters.

Theres always new events in the kingdom where new characters are being added in events or just in the base game so keep an eye out for them each month!

Thank you for reading everyone.  I would highly recommend playing this game for any Disney lover out there.  Just the thought of building your own kingdom full of Disney characters has been so much fun and I have loved every minute of it and I can’t wait for it to grow.