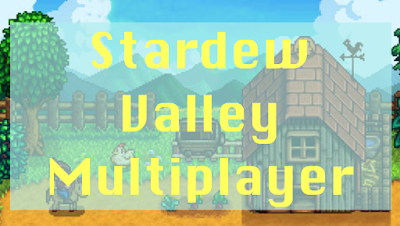 On April 30, the creator of Stardew Valley released the beta for multiplayer for the first time!  When I first bought Stardew Valley I remember thinking that this game would be super fun to play with friends. A year later, the rumor and confirmation came out that there will be indeed a multiplayer feature.  The second that I heard this, I convinced my friends to buy the game and learn the life of Stardew Valley.  Ever since then, we all have been addicted to playing and building up our own farms.


Though it is still unknown to me, what all the new addition to the games are, there have been a few things that I have had the privileged to find out.  A few of the major updates to the game is the multiplayer, the new Winter event, a new boat location at the beach, building Pam a house for her and Penny to live in, and finally the one I find the most amusement out of, getting called out for dating either all the male characters or all the female characters.

These new additions to the game are super exciting and I can’t wait to test them out, except for that last one.  I think I’m going to avoid dating all the guys because I don’t want to get called out for it, that and I only have my eyes set on one character.  As for the new beach location and the winter event, I haven’t had the chance to see it yet, but I know that they will be very fun to play when I get back to winter and when the boat will spawn.

As I’ve played through the multiplayer with friends I’ve decided to write a little thread with all of the bugs I’ve experienced on Twitter as a way to keep track of what errors there are that need fixing.  Since the beta is updated daily many of the bugs that I have encountered have been fixed or were just one-time things.  I will keep updating it until there are no more bugs that I can find, if you want to see the funny bugs me and my friends have found, you can just go to my Twitter to see.  Some of them are really funny too.

I’m really enjoying the multiplayer feature and I can’t wait for the final product to come out. If you haven’t yet, go read my other post reviewing Stardew Valley.  I would highly recommend getting a copy of  the game and playing it for yourself.  You will enjoy it immensely.

Thank you for ready everyone!  Next week, I hope to have another game review up and maybe another stream here to finish the Nancy Drew Creature of Kapu Cave.  Since I kind of skipped a few things in the game, I will go back and replay the last part we were at.  Also, tell me what you think of the new update in Stardew Valley.  Are you having fun with the new additions to the game?